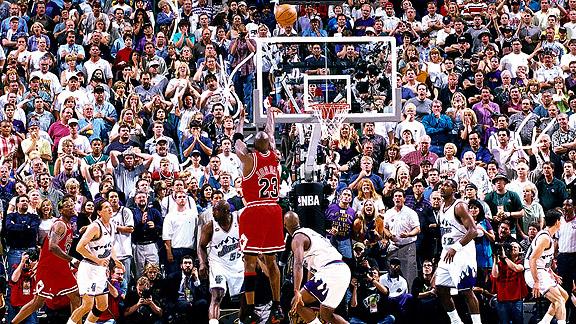 You're going to get mad. But try to not get too mad.

These lists are subjective, and no one will ever get them "right." This one in particular has almost 70 years of series from which to choose, so let's just say right now that this is already lacking a few critical moments.

But here you go, the 10 most memorable moments in NBA Finals history.

Let's remember, these are moments, not performances, otherwise this list might include only Wilt Chamberlain, Bill Russell and Michael Jordan. And let's be real here: Some Finals games aired on tape delay as late as 1986, so the earlier stuff didn't exactly lend itself to memorable moments. So most of these are from a time when we either remember it happening, or we can hit up YouTube and actually find a clip of it happening.

Seriously, don't get mad. Just watch the clips and be entertained.

This was so disrespectful. It wasn't bad enough that Iverson dropped 48 and beat the heavily favored Lakers in Los Angeles, but he hit Lue with the hard dribble-right, step-back, between-the-legs jumper -- not just in Lue's face, but with the entire Lakers bench watching closely from behind.

Then came the dismissive stare down and step over. They've made T-shirts of that image. The shameful part is you know Ty just got his braids done for that game.

This is one of those that would've been higher if it had happened later. The epic game stands up through time, however. And maybe the best detail of Heard's game-tying shot over John Havlicek is that it shouldn't have happened.

The savvy Paul Westphal called a timeout before the play, but the Suns were out of timeouts. Back then, the rules awarded Boston a technical foul shot, but Phoenix got the ball at half court. Then came Garfield. That's right, his name was Garfield.

Perhaps 20 years from now this same shot would be worth four points. Today, it's worth three. In 1970, this ridiculous launch, that somehow looked graceful and by design, was worth a lousy two points. Which meant this game went to overtime. Which meant West and the Lakers would go on to lose this Finals series (this one in seven games), like he did seven other times.

If someone would've thought to paint that 3-point arc earlier, perhaps The Logo wouldn't be just 1-8 in the Finals in his illustrious career.

Let's be honest: Neither Sam Perkins nor A.C. Green were going to affect this shot one bit. But hey, we'd all seen a right-handed spike dunk from His Airness. So why not raise the level of difficulty, switch to the left hand and spin it off the glass? Let's be real one more time: This isn't nearly as memorable a moment without Marv Albert's famous call: "A spectacular move [brief pause] by Michael Jordan!" Thanks for that, Marv.

The first-half performance was unfair. Jordan scored 35 points in that half, including six 3-pointers. How unfair is that -- Jordan lighting it up from distance? Imagine Stephen Curry with a 45-inch vertical jump.

Even MJ was aware he was granted unusual powers that evening. Because that simple shrug, the gesture that became the symbol of these playoffs, and the official sign that this game was just too easy for Jordan, was as genuine as they come.

The late Chick Hearn's call helps make this the signature moment from the Celtics-Lakers rivalry in the 1980s, although maybe not as much for Boston fans.

Magic Johnson swooping across the lane with that right-handed dribble, ignoring the wide-open Kareem Abdul-Jabbar under the basket after Robert Parrish came to help, shooting it over both Parrish and Kevin McHale (wait, McHale was guarding Magic?!?!) with a version of Kareem's sky hook. Too good to stop. Especially with McHale guarding him.

First off, this was not an up-and-under. Go watch Kevin McHale highlights to see what a true up-and-under is. This iconic shot from Dr. J has no name. It nearly defies description. Most people forget it even happened in the Finals. If you were wondering who the initial defender was on that play, that would be Mark Landsberger. Thanks for that, Mark.

Call it "Jesus Saves." Call it the "get those bleepin' ropes outta here" 3. If Ray Allen, aka Jesus Shuttlesworth, calls it the biggest shot of his distinguished career, that's all that matters.

So many details make this game-tying shot that allowed Miami to win its second straight title so compelling. There's Chris Bosh's offensive rebound that came with Tim Duncan on the bench. There's Manu Ginobili sprawling on the floor and unable to recover. There's Allen knowing instinctively where the 3-point line was. And there's the fact that the whole building knew it was going in.

The sequence itself is forever etched in our memories, and within it are snapshots that often stand out: whether it's the dribble right and subtle shove of Bryon Russell; or the image captured with the basketball at its apex, 6.6 seconds left on the clock and all of Utah hyperventilating with panic; or the extended pose that said everything about Jordan's history and -- lets' face it, we all kind of knew -- his immediate future.

Had this been Jordan's last NBA shot ever, it's No. 1. But his stint with the Wizards placed the tiniest of smudges on perfection.

For the rest of human existence, Willis Reed's name will be uttered whenever a player returns to a big game after an injury. But this moment won't ever be matched. It wasn't that Reed came back from a torn leg muscle to dominate Game 7. He scored his first two baskets and then barely played.

But one game after Wilt Chamberlain dropped 45 and 27 against the Reed-less Knicks to tie the series, New York just needed to know Willis was with them. All of New York needed to know. And when he came out of that tunnel during warm-ups and Madison Square Garden experienced a near-seismic event, the Lakers had no shot. Walt Frazier went nuts (36 points, 19 assists), and the Knicks won by 14. This one moment decided New York's first NBA title. And the clock hadn't even started running.

Finals moments: Jordan over Russell
In Game 6 of the 1998 NBA Finals, Michael Jordan hits the game-winning jumper over Bryon Russell and the Utah Jazz.