Torrey Smith, Anquan Boldin, Vernon Davis are crucial if 49ers are to bounce back 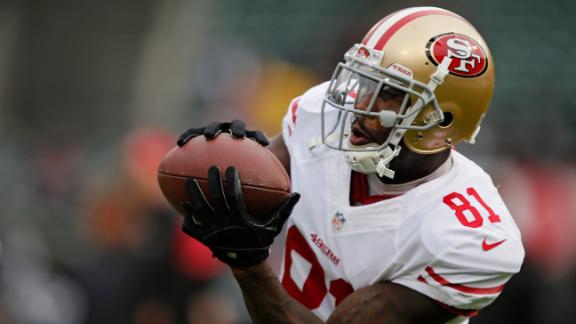 SANTA CLARA, Calif. --Torrey Smithscrolled through his cellphone contacts after learning the San Francisco 49ers were interested in signing him as an unrestricted free agent in early March.

He tapped in the number of 49ers wide receiver Anquan Boldin, knowing his former Baltimore Ravens teammate would shoot him straight. When Boldin answered, Smith exchanged pleasantries and got right to the point.

There were plenty of well-publicized issues surrounding the 49ers that had to be weighing on Smith's decision: the feud between team management and previous coach Jim Harbaugh that ended with Harbaugh moving on to coach the University of Michigan; criticism of inconsistent star quarterback Colin Kaepernick; the late-season meltdown that turned the 49ers from championship contenders into a middling 8-8 squad that missed the postseason for the first time since 2010. But Boldin reassured Smith that there was optimism. "He didn't tell me to come here," Smith said. "He just said this place compares a lot to Baltimore. He told me, 'If you come here, you'll be happy.'"

Smith must have wondered what was happening with his new employer after signing with San Francisco -- four starters from last season already have retired, and five others departed via free agency -- but Boldin might be right about Smith's potential happiness. Along with earning a five-year, $40 million contract, Smith is joining a receiving corps with familiar faces that ultimately could prove to be the 49ers' biggest area of strength. The fifth-year wide receiver is so tight with Boldin that he considers him a big brother. Smith also knows 49ers tight end Vernon Davisas a fellow former University of Maryland star.

That familiarity will be important because San Francisco's passing offense ranked No. 30 in the league both of the past two seasons. Now, for the first time since Kaepernick debuted as a starter midway through the 2012 season, the 49ers have a legitimate deep threat (Smith) to go along with a dependable possession receiver (Boldin) and a Pro Bowl-caliber tight end (Davis). That trio needs to make life easier for Kaepernick, who has spent part of this offseason training with with two quarterbacks coaches and former NFL star Kurt Warner to improve his game.

In 2014, San Francisco relied on an assortment of receivers, including Boldin, Michael Crabtree, Stevie Johnson and Brandon Lloyd. The 49ers ultimately finished 25th in the league in scoring offense -- down from No. 11 each of the previous two seasons -- despite having all those weapons. "It did seem like we had 20 wide receivers last year, and we got in over our heads," Davis said. "Every receiver was trying to find his own identity, and we couldn't all do that. We got a little lost. Now [the three of us] can play off each other. We have our core group of guys that we will go with, and that's really all you need at the end of the day."

Davis clearly is eager to focus on the upcoming season after the way 2014-15 played out for him. After averaging 59 receptions, 814 yards and nine touchdowns in his previous five seasons, he caught just 26 passes for 245 yards and two touchdowns last season. A lingering back injury plagued Davis throughout the year, but his role in the offense also became murkier as the season unfolded.

General manager Trent Baalke recently said injuries and lack of chemistry played a role in the 49ers' overall offensive struggles, but Davis saw the problems as having more to do with a team trying to be more wide-open after thriving with a run-first attack in years past. "Whenever you are part of a team, there are certain leaders: guys who need to become familiar with the quarterback," Davis said. "You want to keep it at a place where the quarterback knows every individual he's working with. You don't want to dilute it to the point that he's confused and frustrated and doesn't know the qualities of his core guys."

New coach Jim Tomsula said the 49ers have "dynamic players," but he still "obviously wants to run the football." That potentially means lots of play-action and deep shots for Smith, Boldin and Davis. Boldin said new offensive coordinator Geep Chryst won't overhaul the offense run by his predecessor, Greg Roman, as much as he will simplify some concepts. "The big thing Geep will do is put players in the best positions to be successful," Boldin said.

The reunion of Boldin and Smith already feels like a step in the right direction for the 49ers. They met during Smith's rookie season with Baltimore in 2011, when he was a speedy second-round pick trying to fit into a locker room filled with oversized personalities. Smith immediately gravitated toward Boldin, as he watched the veteran handle himself professionally in the locker room, on the practice field, in games and away from the team facility.

"The biggest things I learned from Anquan back then came from his actions," Smith said. "He taught me that you have to get ready to practice. You can't just roll in and go -- like I used to do in college. I watched him get his mind right before he went on the field. I saw how he took care of his body. I watched how he took care of his business, and I learned how to do the same for myself."

Smith ultimately blossomed into a key weapon for the Ravens. He started alongside Boldin when Baltimore beat San Francisco in Super Bowl XLVII and produced career highs in receptions (65) and yards (1,128) in 2013. Smith's numbers dropped last season -- he caught only 49 passes, though 11 went for touchdowns -- but the 49ers see a similar chemistry developing again between him and Boldin. It isn't lost on Baalke or Tomsula that Boldin has continued to be a steady playmaker despite his turning 35 this coming October.

Boldin is the most dependable target in the 49ers offense, with 168 receptions and consecutive 1,000-yard seasons during his two years in San Francisco. He credits some of that success to a year-round training routine that includes stretching, intravenous fluids, massage therapy and sessions in a hyperbaric chamber. Boldin said he also believes his style of play has helped him remain productive at an age when most receivers start to vanish from the league. He never relied on speed to beat opposing defensive backs, so he doesn't depend on it now.

"A lot of guys rely on speed, but that's always the first thing to go when you get older," said Boldin, who has 940 receptions and 70 touchdown catches in his career. "Players who have speed usually don't know what to do as they get older, because they usually aren't working on their technique as much if they are fast. I've always had to work on my technique. So my game really hasn't changed at all."

The 49ers are hopeful Boldin can maintain that consistency because their road back to the playoffs runs through the NFC West, arguably the NFL's toughest division. The Seattle Seahawks are the reigning NFC champs. The Arizona Cardinals have enjoyed back-to-back seasons with double-digit wins. The St. Louis Ramsboast a fearsome defensive front and could be poised for a leap if new quarterback Nick Foles can bring stability to the position.

The 49ers also have to overcome recent history. Boldin acknowledged that skeptics are still circling, given the team's exodus of talent and the rise to power of Tomsula that few observers predicted. But Boldin is also quick to point out that "last year was unfortunate with the injuries and the distractions, but it also was a fluke season for the 49ers. Anybody who puts on a uniform here will tell you that."

Davis projects the same sentiment. "Everything we went through last year has reminded me of how much you have to enjoy the now," he said.

Smith echoes the optimism Boldin and Davis voiced, even as pundits express doubts.

"Once I realized I wasn't going back to Baltimore, I wanted to be someplace with a similar vibe," Smith said. "I wanted to go somewhere where it felt like family and they were used to winning. That's what Baltimore was like, and I got spoiled by that. I wasn't looking to go someplace where I would be starting over or rebuilding, and I don't see that happening here."