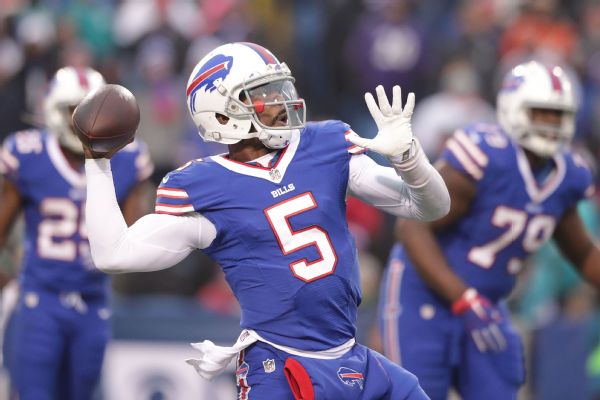 ORCHARD PARK, N.Y. -- Tyrod Taylor is unhappy with the Bills' decision to bench him to close the season, and he questioned whether he has played his final game for Buffalo.

Unless he hears otherwise, Taylor said he can only assume the benching reflects the Bills having lost confidence in him to continue on as their starter.

"That's fair to say. That's what it showed," Taylor said Monday, when Bills players gathered to clear out their lockers a day after a season-ending 30-10 loss at the New York Jets.

"Did I believe that was fair? No, I didn't," Taylor said, adding that he is hoping to get a lengthier explanation from the team during exit meetings. "Once we have the conversation and it's actually explained to me why it was done the way it was, we'll move forward from there. But we'll see when that happens."

Taylor also revealed that he is scheduled to visit a doctor Wednesday for a second opinion on whether he'll require surgery to repair a groin injury that has nagged him over the past month.

The injury didn't prevent him from playing the previous four games. And Taylor did take part in two of Buffalo's three practices last week before he was listed as inactive against the Jets.

The decision to start backup EJ Manuel was made at the same time the Bills fired coach Rex Ryan on Tuesday and promoted Anthony Lynn as the interim head coach.

Without going into detail, Lynn called it a "business decision," and said he didn't take part in the meeting in determining to start Manuel.

The Bills went 7-9 and extended the NFL's longest active playoff drought to 17 seasons.

Taylor's future is cloudy. In restructuring his contract this year and signing him to a five-year contract extension in August, the Bills retained the right to opt out of the deal by March.

Next season's portion of the contract, worth about $30 million including bonuses, is guaranteed if Taylor is unable to pass his physical.

Taylor said the injury clause plays no role in his decision whether to have surgery or when.

"If that's what I need to get done, I want to get it out of the way. It's not about the guarantee," he said.

Taylor said it's premature to say whether he'd consider restructuring his contract to remain in Buffalo.

The benching came after Taylor played his best game, going 26-of-39 for a career-best 329 yards and three touchdowns in a 34-31 overtime loss to Miami.

He finished 269-of-436 for 3,023 yards with 17 touchdowns and six interceptions this season. He also had six rushing TDs.

Taylor has had difficulty rallying the Bills from deficits, going 2-14 in games Buffalo trailed by four or more points at any time of the game. A rash of injuries to Buffalo's top receivers, including to starter Sammy Watkins, hampered Taylor's production.

He did provide a dynamic running element to team that led the league in rushing for a second consecutive season. Taylor finished with 580 yards rushing to break the single-season franchise record for quarterbacks he set last season with 568.

"Can we be better? Yes. Can I be better? Yes," Taylor said. "If the decision is to keep me here, I'm definitely going to continue to keep playing my heart out."