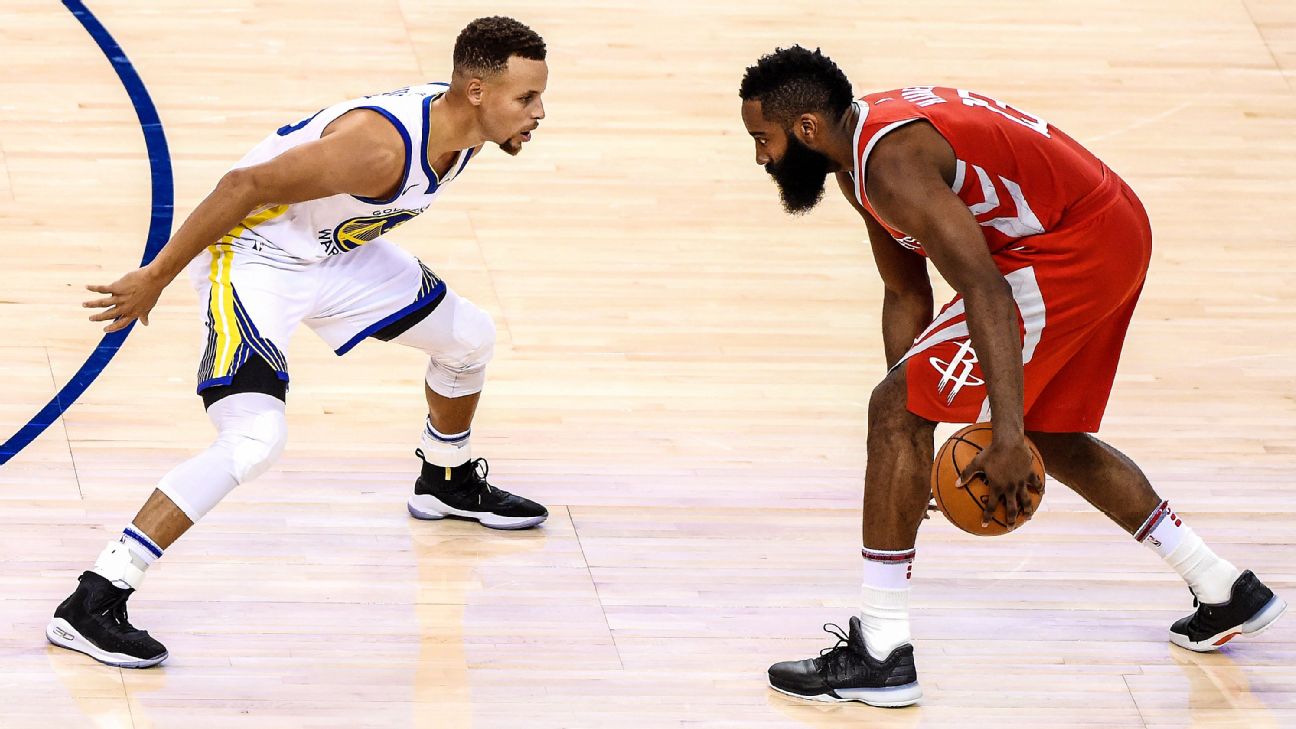 HOUSTON -- You hear that? That is the sound of inevitability.

Both teams played 82 games, and both played five in the first round and five in the second. In the Western Conference finals, it will be the showdown that has been coming all season long, two trains on the same track facing each other, primed for a collision -- the Golden State Warriors vs. the Houston Rockets, with a trip to the NBA Finals at stake.

"It's been a while since we've started out a series on the road -- you kind of forget that feeling," Warriors forward Draymond Greensaid. "We got a couple of swings to go in there and take one. So I'm looking forward to that for sure."

It started opening night, with the Rockets beating the Warriors 122-121 after it was ruled that what appeared to be a Kevin Durant buzzer-beater came just after the buzzer. Two more meetings, a 124-114 Warriors win in January, and a 116-108 Rockets win two weeks later, have the stage set. All three games were close, intense and competitive. And all three produced plenty of drama.

The Warriors eliminated the Rockets in five games in the 2015 and 2016 playoffs, leaving Houston GM Daryl Morey to rethink his roster with an eye tilted toward the Bay. How could he surround James Harden with the kinds of pieces capable of beating the Warriors four times? The way the top-seeded Rockets played through the regular season, and the mindset they've operated with, has them confident.

"I think I'm not supposed to say that, but we're basically obsessed with 'How do we beat the Warriors?'" Morey told ESPN's Ryen Russillo in December. "We calculated it -- it's like 90 percent if we're going to win a title, we've gotta beat the Warriors at some point. A lot of our signings and what we do during the year is based on that. We spend most of our time just figuring out how we might knock the Warriors out in seven games. Because we're pretty sure that's what's going to define our season."

"Maybe we do end up playing the Rockets, and, you know, I like our chances no matter who we play," Greentold Sports Illustrated in February. "But we do know that they're a threat. They've added some great pieces and, as it's been highly publicized, that team is built to beat us. Noted. Great. We'll see y'all soon."

After the final regular-season meeting in January, the Rockets were feeling themselves a little. Clint Capela told ESPN: "We are the better team."

Durant responded the next day: "You hear that from guys like Capela. Usually he's catching the ball and laying it up from CP or James Harden. His job is not hard. When your job is hard, you know you can't just come out there and say s--- like that."

One team won 65 games; the other won 58. Both are extremely confident in their style and system, and feature star power that can overwhelm and overtake. Both present matchup issues for the other. Both have depth. Both have some flaws. Both are very, very good.

"We had a vision, and in order to get where we wanted to go we needed the right pieces. That's what they're here for," Harden said after the Rockets clinched a trip to the conference finals with a Game 5 win over the Jazz on Tuesday night. "I know that if we give the effort we know we can, it's pretty tough to beat us."

The Rockets have known all along what was eventually going to be next. They've been eyeing the Warriors all season, first for the top seed in the West and home-court advantage, because they were consumed with grabbing any available edge.

According to ESPN Stats & Information research, it's the best offensive matchup in modern NBA history. Since 1973-74, there has never been a series featuring two offenses scoring more than 112 points per 100 possessions. The Warriors ranked first in offense at 112.24 points per 100; the Rockets were second at 112.23. If the Rockets had literally made one more shot in the regular season, they would've finished with the top offense. That's how razor-thin the separation is.

"They know what we do, we know what they do," Durant said. "It's just a matter of playing well on that given night. So we'll see what happens."

The three games they've played against each other probably don't really tell us much. The Rockets are using them to boost confidence, but all of them happened more than three months ago, and key players were sidelined in every game. Andre Iguodala sat the opener, Harden and Durant sat the second game, and Iguodala sat the third.

"It's a weird deal because we haven't played them in so long," Warriors coach Steve Kerr said. "And we only played them three times just because of the schedule. It's been a long time since we've seen them. But we know they're a great team, we know they're ready, and we'll be ready for them."

The Rockets were built in the vacuum of the Warriors' dominance. There was a space to fill, and someone had to step forward as the counter to Golden State. The Rockets have spent the season trying to tell everyone they're for real, that they're a clear and present danger; the Warriors have their history and success to do their talking.

"They have made it known that their team is built to beat us," Green said. "Their obsession, or whatever you want to call it -- obviously you want to build your team to beat the defending champs because that's usually the way you've got to go to get a championship.

"That stuff has been said for about a year now. It's time to play."

ESPN's Nick Friedell and Chris Haynes contributed to this report. 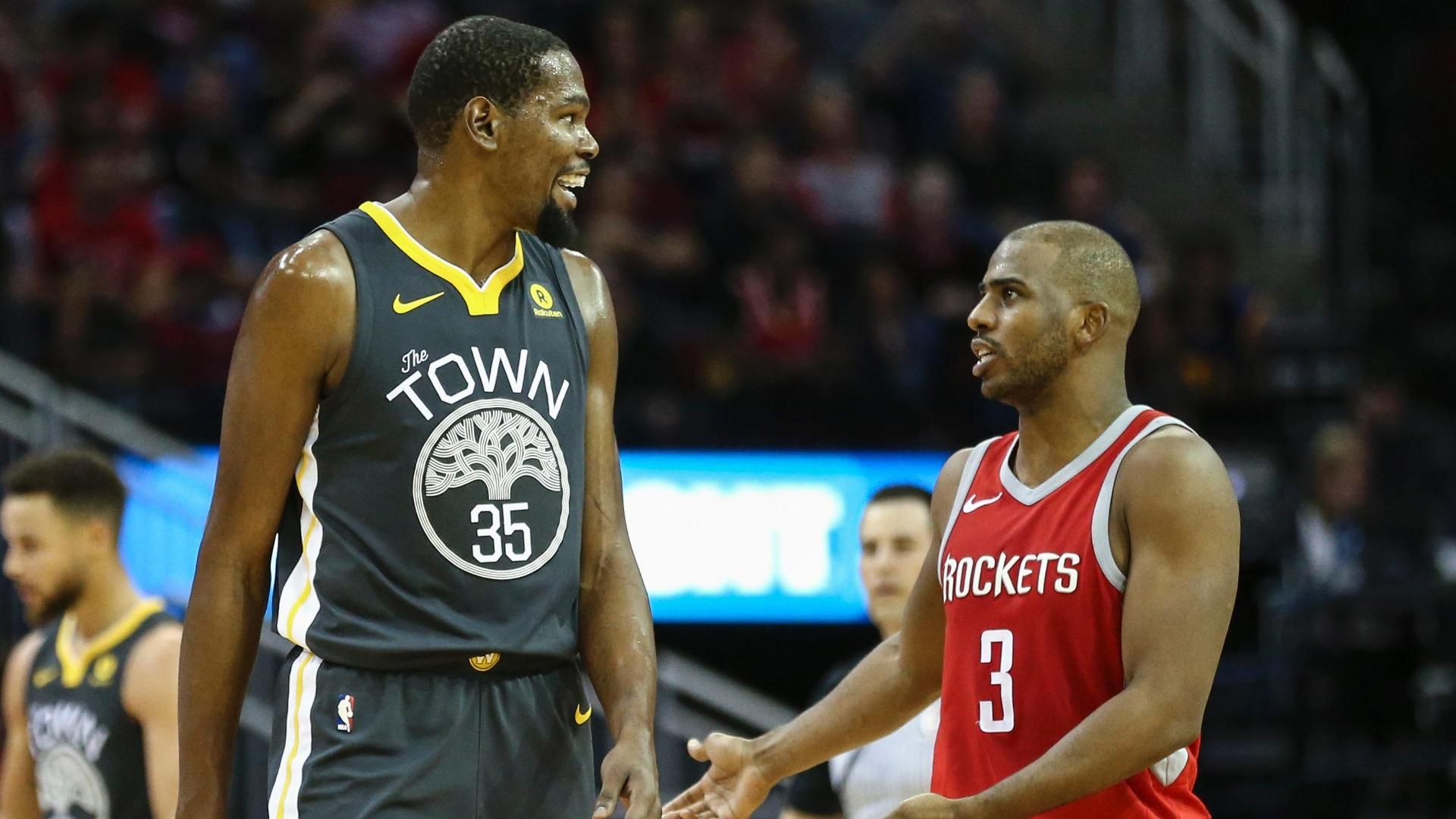 A dramatic journey leads to Warriors-Rockets showdown
From CP3's chaotic matchups versus the Rockets to KD's run in OKC before moving on to Golden State, check out how this Western Conference finals matchup came to be.