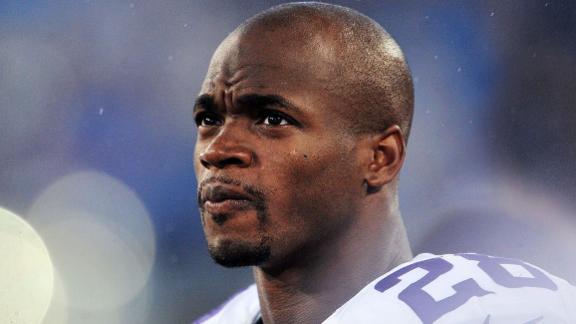 MINNEAPOLIS -- The Minnesota Vikings' efforts to clear the way for Adrian Peterson's return appear to be approaching full speed.

Kevin Warren, who was promoted to chief operating officer Thursday morning, said in a conference call that he would welcome Peterson back, adding that he hoped to win multiple Super Bowls with Peterson in Minnesota and looked forward to attending Peterson's Hall of Fame induction ceremony.

His comments echoed those of Wilf,who said Wednesday that Peterson is "a Minnesota Viking, and we'd love to have him back."

Peterson, the 2012 NFL MVP, was placed on the commissioner's exempt list on Sept. 17 after he was indicted five days earlier for injuring his son while using a wooden switch to discipline him in May. He pleaded no contest Nov. 4 to a misdemeanor count of reckless injury and was suspended Nov. 18 for the rest of the season.

He cannot be reinstated until at least April 15, although the NFL Players Association is suing the NFL in U.S. District Court, seeking Peterson's immediate reinstatement.

Vikings general manager Rick Spielman and coach Mike Zimmerhad previously supported the idea of Peterson's return in their season-ending news conferences, and Zimmer told 103.3 FM ESPN in Dallas that Peterson has support from the "top of the organization [on] down."

"He's been good in the locker room. He's done everything we've asked him to do," Zimmer said Thursday. "I think from the top of the organization [on] down, we all want Adrian back. We know what he brings to our offense and to our football team and really to Minneapolis and the Twin cities."

Warren did not deny a report by ESPN NFL Insider Adam Schefter in November that he was working with the NFL to keep Peterson from playing again in 2014.

He was the only Vikings official to attend Peterson's hearing in Minneapolis on Friday, when the NFL Players Association argued before U.S. District Court Judge David Doty that the running back's suspension should be vacated.

"I respect the NFL, I respect the NFL process and I respect the fact, as far as communicating with players that are in his status. We're going to abide by the rules. But again, when I see a Vikings family member, I definitely want to acknowledge him, have a chance to shake his hand, tell him it was good to see him and that he looked good."

Peterson told ESPN in December that he had thought about playing for other teams during his time on the commissioner's exempt list, but added he felt supported by teammates and coaches, and that he had watched all of the Vikings' games during his time away from the team, imagining how he'd fit in the offense.

"Through this process, I've thought about playing other places, with everything that's been floating around the organization," Peterson said. "But I keep a level mind. The people that are doubting me are people that are, in the big scheme of things, not relevant. I'm able to look at the organization as a whole and see [it] for what it is. There are friends, teammates -- people I've been around for years. I think about what I would be leaving behind, but it's a business as well."

After his hearing Friday, Peterson said he would "of course" want to return to the Vikings.

It remains to be seen, however, whether the team will try to keep Peterson at his $15.4 million cap number in 2015, or whether Peterson would bristle at the idea of restructuring his deal.

Tim MacMahon of ESPN.com contributed to this report.