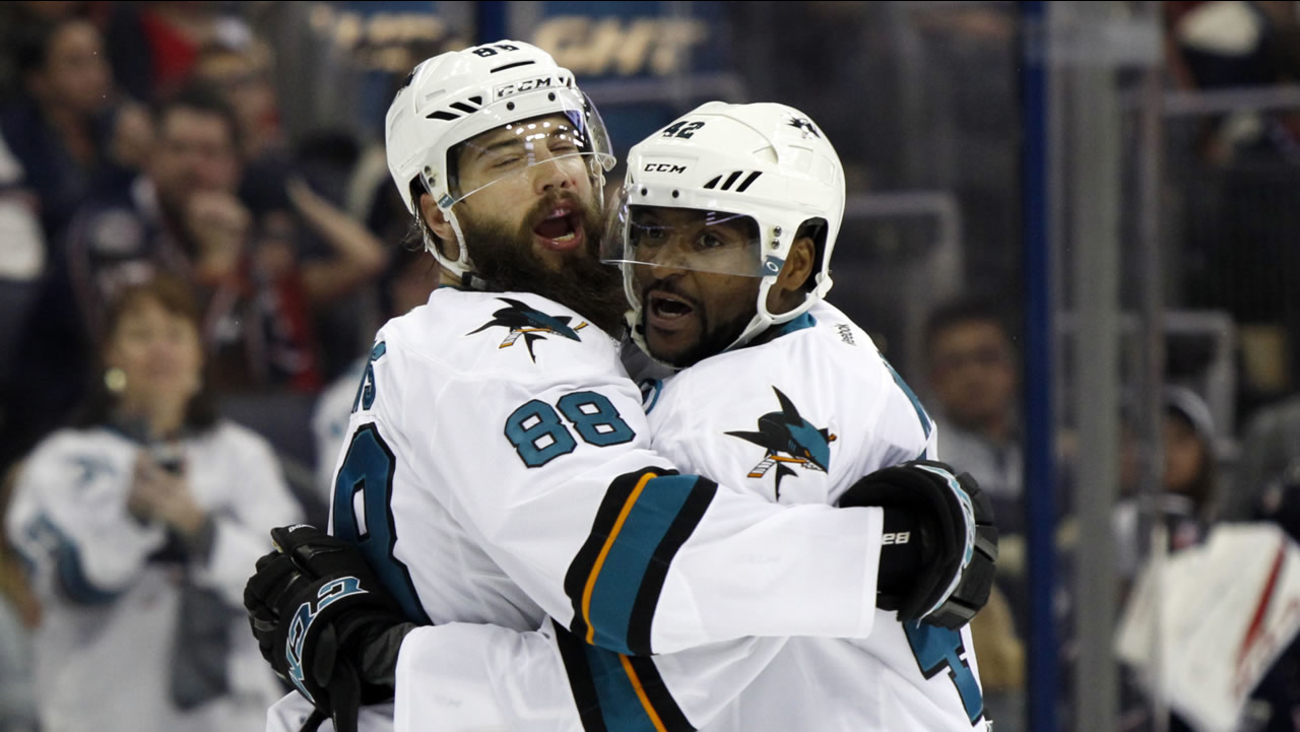 COLUMBUS, Ohio -- The San Jose Sharks are off to a strong start in their quest to return to the Stanley Cup Final.

Mikkel Boedker and Joel Ward scored for an early lead and Patrick Marleau had an empty-net power-play goal, leading the Sharks over the Columbus Blue Jackets 3-2 on Saturday night.

Martin Jones made 26 saves for San Jose, which beat the Los Angeles Kings 2-1 in its season opener Wednesday.

Boedker's goal was his first with the Sharks.

"It was nice to score and help a team get the lead and all that," said Boedker, who joined the Sharks as a free agent after stints with Colorado and Arizona. "That was definitely a good one to get out of way."

Zach Werenski and Josh Anderson each got their first goal for Columbus, which has lost its first two games this season.

Boedker scored 9:22 into the first period when a dump-in play by Logan Couture led to a tricky rebound off goaltender Sergei Bobrovsky. The puck was deflected to Boedker, who buried it over Bobrovsky's left shoulder.

Brenden Dillon and Couture were both credited with assists.

Just over five minutes later, a pass from the corner by Brent Burns found Ward in front of the net, and he sneaked the puck under Bobrovsky's right pad. Chris Tierney also earned an assist.

"I had a feeling (Burns) was going to swing it across," Ward said. "He was going to shoot on net, so I figured it was best to play the angle where the goalie was, or he was going to throw it across. I just tried to sneak my way in the back door."

Bobrovsky made 35 saves and kept the game within reach.

"Bobrovsky was excellent," Sharks coach Peter DeBoer said. "We had real quality opportunities to extend the lead and didn't. When you let a team hang around like that, you're fighting for your life down the stretch."

Rookie Werenski got the Jackets on the board 3:44 into the second period on a power play. It was the first goal of Werenski's three-day-old NHL career, with assists from Alexander Wennberg and Cam Atkinson.

"Zach is a guy you can see, especially tonight, how he can control the game with the puck," said Columbus coach John Tortorella. "We have a lot of teaching to do with him without the puck. That's our job as coaches. The God-given ability he has, it's at a different level than a lot of players at this league."

Brandon Dubinsky went off for tripping at 2:08, and the Jackets pulled Bobrovsky at 1:20, but Marleau slammed the door with his empty-netter with 33 seconds left.