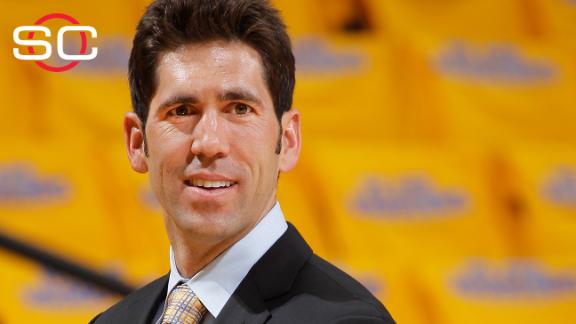 OAKLAND, Calif. -- His voice cracking and his eyes watering, Golden State Warriors general manager Bob Myers nearly let his emotions get the best of him on one of the biggest days of his career.

Myers accepted the NBA's executive of the year award Friday while his wife, Kristen, sat in the front row of a hotel ballroom alongside his parents. He got choked up while thanking her for all she does in raising their daughters, 5-year-old Kayla and 2-year-old Annabelle, when work often takes him to other places.

"Being a general manager or an executive in any sport is hard because you're away from your family a lot," Myers said, pausing to rub his eyes and collect his thoughts. "It's a fantastic job, but you make sacrifices to do it. But in this job, specifically working for this team, it's been well worth it."

Myers called the recognition by his peers the "highest honor" and views the award as a culmination of the franchise's three-year rise than any one thing he did.

Modest as he may be, Myers has been at the forefront of team's biggest basketball decisions. He helped assemble a talented roster around star Stephen Curry that rolled to a franchise-record 67 wins, earned the league's top playoff seed and could compete for championships for several years.

Players credited Myers for being open and honest with them. Coach Steve Kerr, a former executive with the Phoenix Suns, said among Myers' best talents is communicating well with people and developing trustworthy relationships. Former coach Mark Jackson, who the Warriors fired after last season, was even among those who sent Myers a congratulatory text message.

The moment was almost too much for Myers. This is the same guy who grew up a Warriors fan in nearby Danville and still has the ticket stubs from his first Warriors game -- Jan. 15, 1982, against the New York Knicks.

"It's something you really can't dream of or imagine. Sometimes you have to remove yourself from the situation to even realize that it's happening," Myers said.

Myers was a sports agent at the Wasserman Media Group when Warriors owner Joe Lacob hired him in 2011 to be Golden State's assistant general manager. He was promoted a year later to replace GM Larry Riley, and he quickly asserted himself as one of basketball's brightest young minds.

Most of Myers' best work with the Warriors came before this season, when he didn't make any trades. Instead, he helped hire Kerr and signed Shaun Livingston and Leandro Barbosa as backup guards.

Of course, his best move might have been the one he didn't make.

Myers chose not to include Klay Thompson in trade talks last summer with Minnesota for Kevin Love, who ultimately landed in Cleveland. The Warriors signed Thompson to a four-year, near-maximum extension of $70 million. Thompson made the All-Star team for the first time and has blossomed into one of the league's best two-way guards.

Myers said he got a call from Timberwolves coach and executive Flip Saunders after winning the award. Myers called Saunders back, but he didn't answer.

Myers has maintained all along that he wanted to see what this group of players could do before making such a major change.

"Clearly, they've proven our front office right more than we did anything," he said.

Myers also engineered the trade-deadline deal in March 2012 that netted center Andrew Bogut and sent Monta Ellis to Milwaukee. He drafted Draymond Green, Harrison Barnes andFestus Ezeli, and he pulled off a series of complicated trades in the summer of2013 that cleared salary cap space to sign Andre Iguodala.

In one of his most debated decisions, Myers inked Curry to a $44 million, four-year contract extension before the 2012-13 season. Back then, the deal looked like a major risk for the Warriors considering Curry was coming off his second surgery on his troublesome right ankle. Now Curry is the MVP favorite, and the contract looks like one of the NBA's best bargains.

Myers has had some misses, to be sure, such as signing Toney Douglas, drafting Nemanja Nedovic, acquiring Jordan Crawford and using the amnesty clause to cut Charlie Bell in an attempt to sign restricted free agent DeAndre Jordan, who stayed with the Los Angeles Clippers.

But Myers has minimized mistakes along the way, and it's a big reason why the Warriors are one of the title favorites.

Myers joined Dick Vertlieb, who was named executive of the year during Golden State's championship season in 1974-75, as the only recipients of the award in Warriors history. Golden State hosts Memphis in Game 1 of the Western Conference semifinals Sunday.