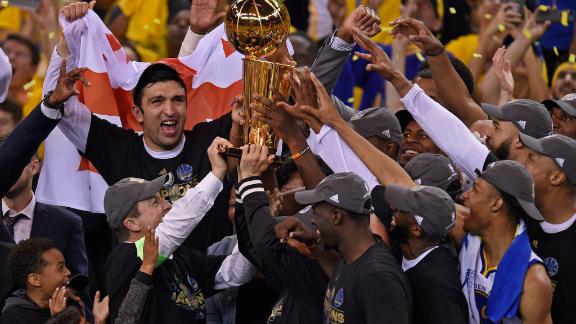 The Golden State Warriors are even bigger favorites next year.

The Warriors, fresh off Monday night's 129-120 win over the Cleveland Cavaliersto clinch the NBA title, are listed as -200, odds-on favorites to win next year's championship, a historic price on a preseason favorite.

"They're going to be the highest favorite we've ever had going into a season, any team in any sport," Jeff Sherman, NBA oddsmaker at the Westgate Las Vegas SuperBook, told ESPN.

Before this season's Finals tipped off, the Westgate SuperBook installed Golden State as a -160 favorite to win next year's title. Oddsmakers increased the Warriors' odds to -200 after Golden State made quick work of the Cavaliers, winning in five games to cap a 16-1 run through the playoffs.

The Warriors began the 2016-17 season as -150 favorites and remained on top of Las Vegas odds boards throughout the season. They were underdogs in only three games this season and won 31 of their last 33 games, including their prolific postseason run.

The Cavaliers are the clear-cut No. 2 favorites to win next year's title, at 3-1 at the SuperBook. Cleveland and Golden State are the only teams with single-digit odds.

The Brooklyn Nets, Orlando Magic and Sacramento Kings are the biggest long shots to win next year's championship, each listed at 1,000-1.

NBA free agency begins July 1. Golden State point guard Stephen Curry is an unrestricted free agent, and forward Kevin Durant has a player option, but neither is expected to leave the Warriors. Los Angeles Clippers stars Chris Paul and Blake Griffin and Utah Jazz small forward Gordon Hayward are among the impact players who could be on the move this summer, as teams try to figure out how to stop Golden State.

Indiana Pacers guard Paul George, who has one year left on his current contract, has been mentioned as an addition for Cleveland whocould narrow the gap between the Cavaliers and the Warriors.

"Adding [George] to the mix might be the closest thing we could see to another team challenging [Golden State] next year," Sherman said, adding that the Warriors would still be the favorites if Cleveland added George.

Bomani would put Warriors on floor with any other team
Bomani Jones breaks down how Golden State's roster construction makes them able to compete against any other team.