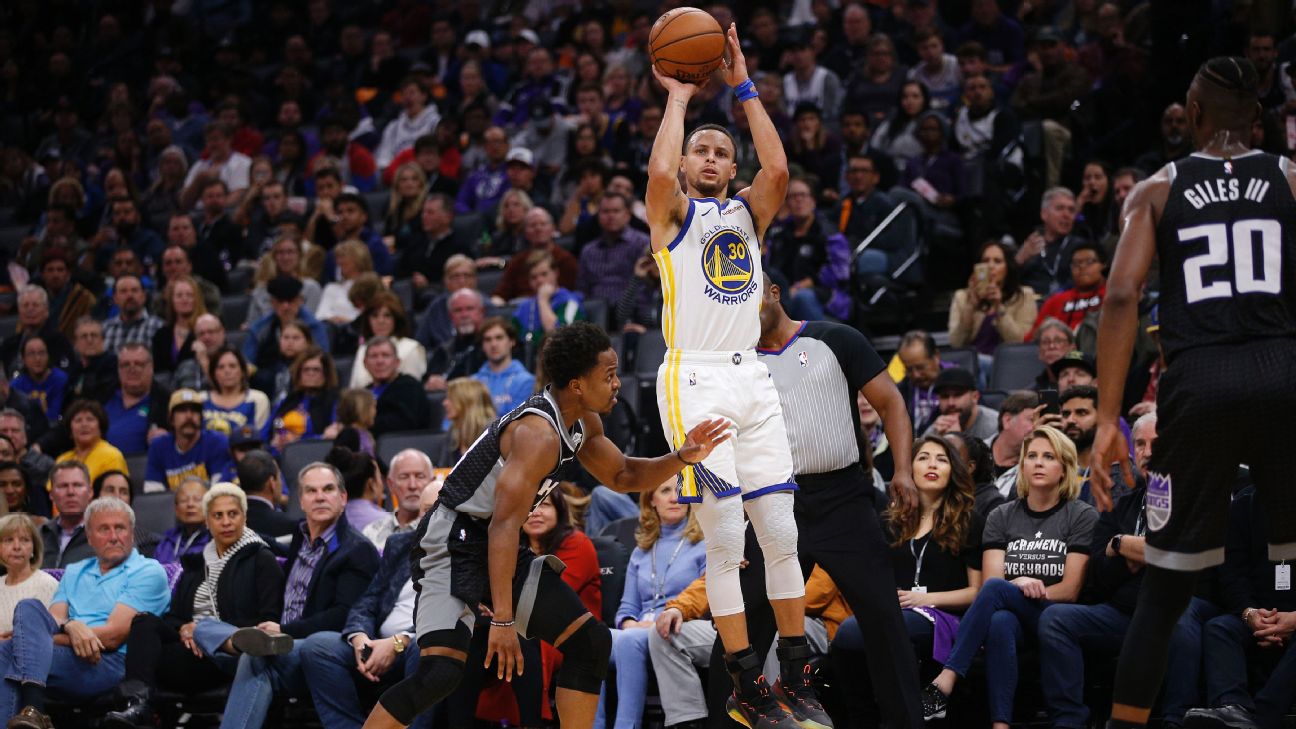 It marked the first game in NBA history in which both teams made at least 20 3-pointers; the Warriors went 21-for-47, and the Kings went 20-for-36.

Warriors coach Steve Kerr was happy with the result and said his team knows that shooting from distance has become the new normal around the league.

"It's right there for you to see, right?" Kerr said of both teams' offensive prowess. "Everybody's shooting 3s. That was just an incredible offensive display by both teams. The problem for us tonight was the turnovers. Every time we turned the ball over, it was a 3 or dunk. That's what kept them in the game. I thought offensively we got anything we wanted, we did a good job moving the ball. But they got 29 points off our turnovers, a lot of those were 3s."

The Warriors and Kings eclipsed the previous mark of 40 3-pointers, set in a February 2018 game between the Minnesota Timberwolves (19) and the Cleveland Cavaliers (21).

Warriors star Kevin Durantsaid he did not believe the 3-point barrage the league has seen in recent years will continue much longer.

"It's fast," Durant said of the current pace. "I'd rather play inside the 3-point line, but you got to adapt. I think a lot of players have adapted their games and changed how they play. But I don't see this lasting too much longer."

"Just the volume of 3s," Durant said. "The way the game is played, pick-up style. It will cease here in a second, but I think a lot of guys are just adjusting their games to the times. It's fun for the fans, it's fun for us at times. But it's also tough to watch and tough to play against. But hey, that's what we signed up for."

The Kings, whose 20 3s set a franchise record, fell short down the stretch in a game that had 18 lead changes.

"It was a crazy game," said Kings forward Justin Jackson, who went 5-of-7 from 3-point range and scored a career-high 28 points. "It felt every time we went down the court somebody hit a 3. That's obviously not an every game type of thing, but it shows the types of shooters that both teams have and the ability that both teams have to knock down 3s. It was very good to see a lot of those shots fall for us."

Warriors swingman Klay Thompson said he had "fun" playing in that kind of shootout but acknowledged just how much the game has changed in recent years.

"So much," said Thompson, who made three 3-pointers and finished with 20 points. "When I grew up, what I was used to watching was a slower pace. Except teams like the Suns would come around, the Nuggets, but now it's like [we're] middle of the pack in pace of play, so that's incredible to think about. It feels like four or five years ago we were ahead by a huge margin ... the Showtime Lakers played like that, but you got to be in great shape. It's fun to be a part of, honestly."

Warriors forwardDraymond Green, a former Defensive Player of the Year winner,affirmed a point he has made several times throughout the year about how the flow of games has changed.

"You can't really play defense in the league today," Green said. "So, I guess that's what [the league] wanted, right?"

Warriors superstar Stephen Curry finished with 42 points, going 10-for-20 on 3-pointers. With Kings guard Buddy Hield going 8-of-13 on 3s, it marked the first game in NBA history in which multiple players made at least eight 3s, according to ESPN Stats & Information research.

Although Curry and his teammates said they enjoyed the pace of Saturday's game, Curry also said he knows that when the big games come around later in the season, they will have to do a better job controlling the defensive tempo.

"At the end of the day, we know in order to win championships you got to get stops and we did that in the fourth quarter," Curry said. "It's a fun way to play, especially when you're shooting a high percentage. You can shoot as many 3s as you want to, but shooting a high percentage the way it was tonight on both ends was pretty crazy. Knowing that any breakdown or lapse in effort or decision-making, somebody was going to knock down a shot."