Which player had the best sneakers of Week 12 in the NBA? 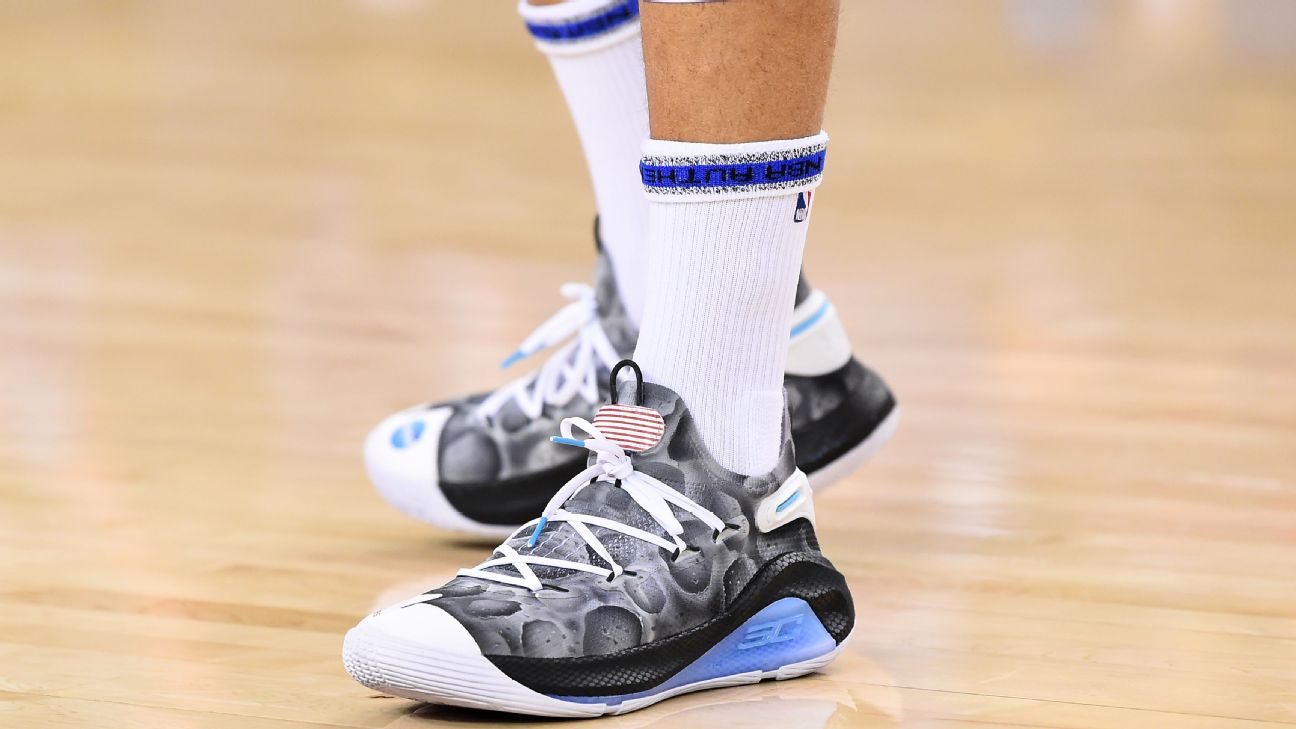 In a week filled with debuts and surprises, Golden State Warriors point guard Stephen Curry led the way with a custom hand-painted edition of his latest Under Armour sneaker -- a joking nod to his "moon landing" controversy weeks ago.

Curry jokingly disputed that perhaps man hadn't landed on the moon, instantly catching the attention of NASA and prompting an invite to the Johnson Space Center in Houston. The Warriors star reversed course on his views and donned the grey moon rock textured sneakers, fittingly against the Rockets, complete with a NASA logo on the toe and Stars and Stripes touches along the tongue.

He'll sign the shoes and auction them off all this week on eBay through a collaboration between DonorsChoose.org and the Stephen and Ayesha Curry Family Foundation. The proceeds from the autographed kicks will benefit local STEM education programs in the Bay Area, providing young students with more knowledge about science, technology, engineering and mathematics.

"One of the most effective ways to set our children up for success is to ensure they receive excellent STEM education," said Curry. "Ayesha and I are passionate about making sure that STEM education is accessible and available to all children in the Bay Area."

This week also saw the debut of Oklahoma City Thunder point guard Russell Westbrook's second signature sneaker, the purposely funky and unconventional Jordan WhyNot Zer0.2. First worn in his hometown of Los Angeles and again in Nike's backyard against Portland, the sneaker incorporates the colors of every team he has played on since high school, along with a series of additional quirks, like subtle "W" hits throughout, and a size tag stamped into the shoe's heel. Westbrook is the only Jordan athlete to have both an on- and off-court signature series.

"To have my own line, and to be creative in building it, is taking a step in an impossible zone," Westbrook said. "I'm going to keep trying to create distinction while doing it."

Minnesota Timberwolves guard Derrick Rose unassumingly debuted the Adidas DRose 10, celebrating a decade of his longtime signature series with the brand. An early wear test edition of his upcoming 2019 launch, the triple black colorway offered up a stealth and subtle first impression.

The sneaker takes cues from the early most-coveted models of his series, while layering in extra coding along the midfoot shank. The 88 nods to his birth year, 08-09 honors his rookie season, and -- of course -- 2011 highlights the season Rose became the youngest MVP in league history.

The shoe is slated to launch in China later this spring, where Rose's sneaker series is still sought after, even enjoying retro re-releases for the first time this season. The ongoing love he experiences in China has helped him place third in the league's first All-Star fan voting among the Western Conference, behind only LeBron James and Curry.

"Retros and going on to my 10th signature shoe, I think any basketball player with a brand is praying for [that]," Rose said. "I felt like I had to work to get it. I wasn't handed a shoe when I made it to the league."

Another Adidas highlight this week was spotted on the feet of Jeremy Lin, as the Atlanta Hawks point guard broke out a tribute-laden pair of the Crazylight Boost 2016 from a couple seasons ago.

"I just remember seeing a shoe with a lot of text inscriptions on it, and it looked almost like an ancient text," Lin recalls. "I remember thinking to myself, 'I want to do something like that, but I want it to be about my family.'"

The white-and-black sneaker features those closest to him throughout, highlighting Lin's parents, Gie-Ming and Shirley; his brothers, Joshua and Joseph; and his sister-in-law Patricia.

Lin is set to be a sneaker free agent as his Adidas deal comes to a close, setting up an intriguing window of negotiations because his global appeal appears to be everlasting. He placed eighth among Eastern guards in All-Star fan votes, even though "Linsanity" was several seasons ago.

Last but not least, as always, Houston Rockets power forward PJ Tucker continued his dominance across the league with a new batch of clashing, colorful rare pairs. Originally released during the 2011 lockout-shortened season, Kevin Durant's fourth signature model playfully took inspiration from what their then-star would have found as a career had he not had the NBA to aspire to.

The "Weatherman" KD 4, complete with a pressure-map graphic outsole and Doppler patterning along the upper, was born, becoming an instant hit and one of the most coveted pairs of Durant's Nike series.

"I've known KD for so long. I brought him into Texas, being a fellow Longhorn," said Tucker. "We've been friends for years and I've always loved his sneakers. Our connection is deeper than anything."