Would chasing LeBron be worth the risk for the Warriors? 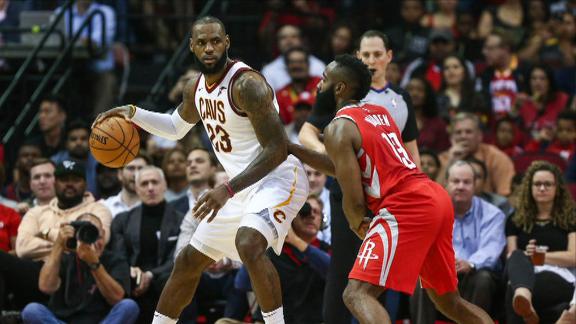 ESPN's Chris Haynes reported Thursday that James would be open to meeting with the Warriors if they're able to find a way to offer theCavaliersAll-Star a max contract when he becomes a free agent this summer by declining his 2018-19 player option.

The idea of adding yet another Hall of Famer to Golden State's core is tantalizing. Yet acquiring James would surely cost the Warriors one of their four All-Stars and likely force them to rebuild their bench. Is adding a 33-year-old player, even one still playing at an MVP level, worth that kind of disruption? Let's take a look.

The Warriors may re-sign additional players to similar contracts, as they did last summer when JaVale McGee, Zaza Pachulia and David West all returned at modest raises over their 2016-17 salary. Bringing back restricted free agent Patrick McCaw is also a likely possibility, barring an unexpectedly large offer sheet.

Given that Golden State would begin the summer more than $10 million over the projected luxury-tax line, any outside additions are likely to be more modest than last offseason, when the Warriors used their taxpayer midlevel exception to sign coveted free agent Nick Young.

So let's assume for the moment that McCaw, McGee, Pachulia and Omri Casspi all re-sign, while Young heads elsewhere and West retires at age 37. That would leave Golden State with the following rotation, along with their 2018-19 projections using ESPN's real plus-minus (RPM):

The baseline estimate for the 2018-19 Warriors is an offense 6.3 points per 100 possessions better than league average and a defense 3.4 points per 100 possessions better than average, which would typically translate into about 63 victories. (Golden State is currently on pace for 64 victories this year.) Ho hum. Given their ability to ramp up the starters' minutes in the playoffs, the Warriors would surely again be favored to win the championship, barring something unforeseen.

Projecting the Warriors with LeBron

OK, now let's imagine that everything comes together and Golden State manages to acquire James in a sign-and-trade deal for Thompson and Iguodala. (This is a better scenario for the Warriors than having to clear enough space to sign James outright, as ESPN's Bobby Marks explained Thursday, but not as good as one where James picks up his 2018-19 player option and restrictive sign-and-trade rules for taxpaying teams no longer apply.)

Besides Thompson and Iguodala, Golden State would also have to sacrifice Livingston to get its salary below the luxury-tax apron. McCaw and Pachulia might also be gone, provided they get offers for more than the veteran's minimum -- about all the Warriors could offer free agents in this scenario. So Bell becomes the fifth starter and Golden State gives heavy minutes to replacement-level players. Here's how that looks.

Yes, you read that right: that's 53 minutes per game to replacement-level players making the minimum salary. Nonetheless, James is such an upgrade that Golden State's projection still improves at the offensive end to 7.4 points per 100 possessions better than league average -- slightly better than the Warriors' offense this season, and enough to offset any defensive decline. This team would be projected for 65 victories.

The quibble here is that RPM is almost certainly underrating Thompson's contributions at the defensive end of the court because of his limited box-score stats. RPM projects swapping Thompson for James as a defensive upgrade, and that's too optimistic -- at least during the regular season.

We also haven't taken fit into consideration. Replacing Thompson with James in Golden State's starting five would in many ways be a larger stylistic change than adding in Durant was last season. Because James is not an elite spot-up shooter like Thompson, the Warriors would probably want to put the ball in his hands and utilize Curry and Durant off the ball more. There are also some diminishing returns to putting so many elite shot creators in the same offense.

At the same time, projecting all the leftover minutes to be played at replacement level is too pessimistic. Golden State would be an attractive destination for free agents who are left out when this summer's limited cap space is spent, given the opportunity to play rotation minutes for a championship favorite, so I'd expect the Warriors to beat this projection.

Looking beyond next season

Projecting out further than 2018-19 becomes challenging, but Golden State's front office would have to take the future into account before weighing a possible run at James. Replacing Thompson, who will turn 28 next week, with the 33-year-old James would make the Warriors' roster -- already fourth-oldest in the league when weighted by minutes played -- even grayer. And adding James' massive salary to Curry's max contract would make it more difficult for Golden State to manage its luxury-tax bill in the 2020s.

On the plus side, trading Thompson would remove perhaps the biggest risk to the Warriors' long-term future: his unrestricted free agency in the summer of 2019. It's possible by that point Thompson could want a larger role on another team.

Given that concern, and the potential upgrade, I think the benefits of adding James would outweigh the downsides -- if Golden State knew he would definitely sign on. Therein lies the rub. If the Warriors don't know whether they can land LeBron or not, pursuing him doesn't seem to be worth the risk of potentially alienating their current championship core.

Golden State dreamed big to sign Durant in the summer of 2016, but that meant sacrificing only role players like Andrew Bogut and Harrison Barnes. The costs of a failed run at James would be much more painful.