Yadier Molina out of Game 3 lineup 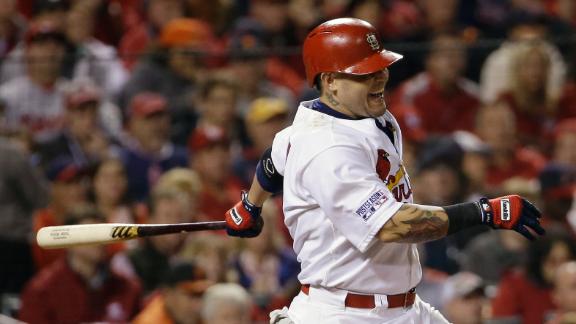 A.J. Pierzynski started in place of Molina, who had started the past 83 postseason games for the Cardinals, since current manager Mike Matheny was behind the plate for Game 3 of the 2004 World Series against Boston.

Molina is perhaps the most valuable member of the Cardinals for his ability as a hitter as well as the way he handles pitchers and shuts down the running game.

Molina strained his left oblique in St. Louis' win in Game 2 of the series and was replaced by Tony Cruz. Pierzynski is getting the nod despite not being on the division series roster and having caught just nine innings since Aug. 30.

But Pierzynski caught Lackey's first 18 starts this season when the two were teammates in Boston, contributing to Matheny's decision to go with him Tuesday. The two teamed up for two more starts in St. Louis and have a good rapport.

Pierzynski missed more than two weeks in July between being released by Boston and signing with St. Louis, giving Matheny confidence that the time off will not be a hindrance.

"I think 16 years' experience has some carry-over effect," Matheny said before the game. "But he caught a bullpen yesterday and we went out and threw him early a time or two, too, and tried to keep him sharp, not knowing what's going to happen."

Matheny said Molina is not in danger of making his injury worse by playing but has significant pain in his side. Molina is not able to take batting practice yet but could be used as a defensive replacement if he comes out of his pregame workout feeling good enough to play.

"We know that he's going to push when he can push," Matheny said. "As long as we're not risking him hurting himself further, we're going to allow him to keep moving forward."

Pierzynski batted seventh for the Cardinals with Kolten Wong moving up to sixth after hitting a game-ending homer off Sergio Romo to win Game 2 and tied the series at a game apiece.

The Giants also made a minor tweak to their lineup with left fielder Travis Ishikawa moving up one spot to seventh in the order with shortstop Brandon Crawford dropping to eighth.

Manager Bruce Bochy wanted to preserve the option of breaking up his three lefties at the bottom of the order starting with first baseman Brandon Belt. Michael Morse, who has been sidelined with an oblique injury, is available now as a right-handed pinch-hitter for Ishikawa.

Crawford is also just 2 for 20 in his past five games.