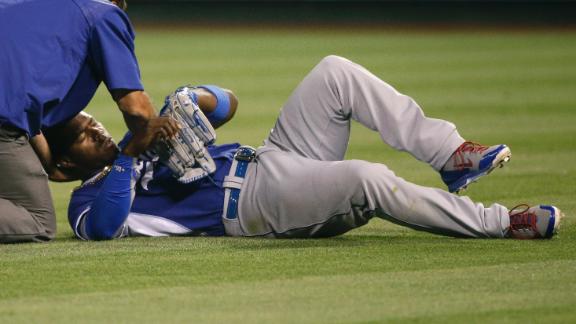 
Puig and Kendrick both went after a popup in shallow right field in their exhibition game against the Angels. Kendrick, who spent his first nine big league seasons playing second base for the Angels before they traded him to the Dodgers in December, peeled off when he heard Puig call for the ball at the last instant -- but could not avoid hitting him.


Kendrick's left elbow appeared to land on Puig's cheek and throat area as he sprinted in for the ball hit by Mike Trout, which ended up being a triple. Puig immediately fell to the grass, and put both his hands over his face and head.

"There hasn't been any trouble out there all spring. It was just one of those things," Dodgers manager Don Mattingly said. "I don't know if Yasiel didn't think he could call it early enough. I mean, you can't call for it until you know you've got it, so everybody keeps coming until the end. And obviously with him calling it late, Howie's going to keep going and he's going to have trouble stopping."


Mattingly said he was glad everyone was OK.


"It looked like Howie got him in the neck or the throat with his shoulder," Mattingly said. "Howie didn't hear anything until the last second. The infielder's going to keep going until he hears something, and that's basically what Howie did. That's when it gets dangerous.''


Puig was down and attended to by trainers for several minutes but got up on his own and left the game. He was replaced in right field by Chris Heisey.


The team announcedPuig was taken out as a precaution and is expected to be fine.