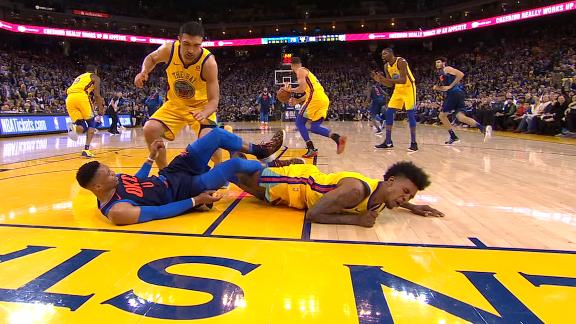 Golden State Warriors center Zaza Pachulia will not receive any discipline from the NBA for falling on Russell Westbrook's legs during Saturday's game, the league confirmed to ESPN.

The NBA reviewed the play and the league office told ESPN's Chris Haynes they had a difficult time finding evidence showing that Pachulia intended to fall on Westbrook's legs.

Pachulia will be in uniform for the Warriors on Monday night against the New York Knicks.

Late in the third quarter of Saturday's game, after Westbrook drove to the basket and fell after a layup attempt, Pachulia awkwardly toppled over, falling on Westbrook's lower half. Westbrook reacted and writhed in pain, before shaking his head and getting up to run back down the floor. Westbrook was irate over the play following the game, calling Pachulia a dirty player and saying there was clear intent to injure.

Pachulia's teammate Kevin Durant came to his defense on Sunday, saying the big man was tripped by Nick Young after Westbrook's drive.

"I don't think Zaza is trying to hurt anybody," Durant said. "He is clumsy. Don't get me wrong. A lot of big guys are. But I watched the tape. I seen Nick's foot get caught in Zaza's leg."

Pachulia has been involved in a number of incidents with players, injuring Kawhi Leonard in the 2017 playoffs by sliding underneath the Spurs star on a jump shot. The play left San Antonio coach Gregg Popovich furious.

"Who gives a damn what his intent was?" Popovich said at the time. "Have you ever heard of manslaughter? You still go to jail, I think, when you're texting and you end up killing somebody but may have not intended to do that. All I care is what I saw. All I care about is what happened. And the history there exasperates the whole situation and makes me very, very angry."

Pachulia also had a run-in with Westbrook last season following a hard foul -- ruled a flagrant 1 -- where he stood over Westbrook, leading Westbrook to say he would "get his ass back."