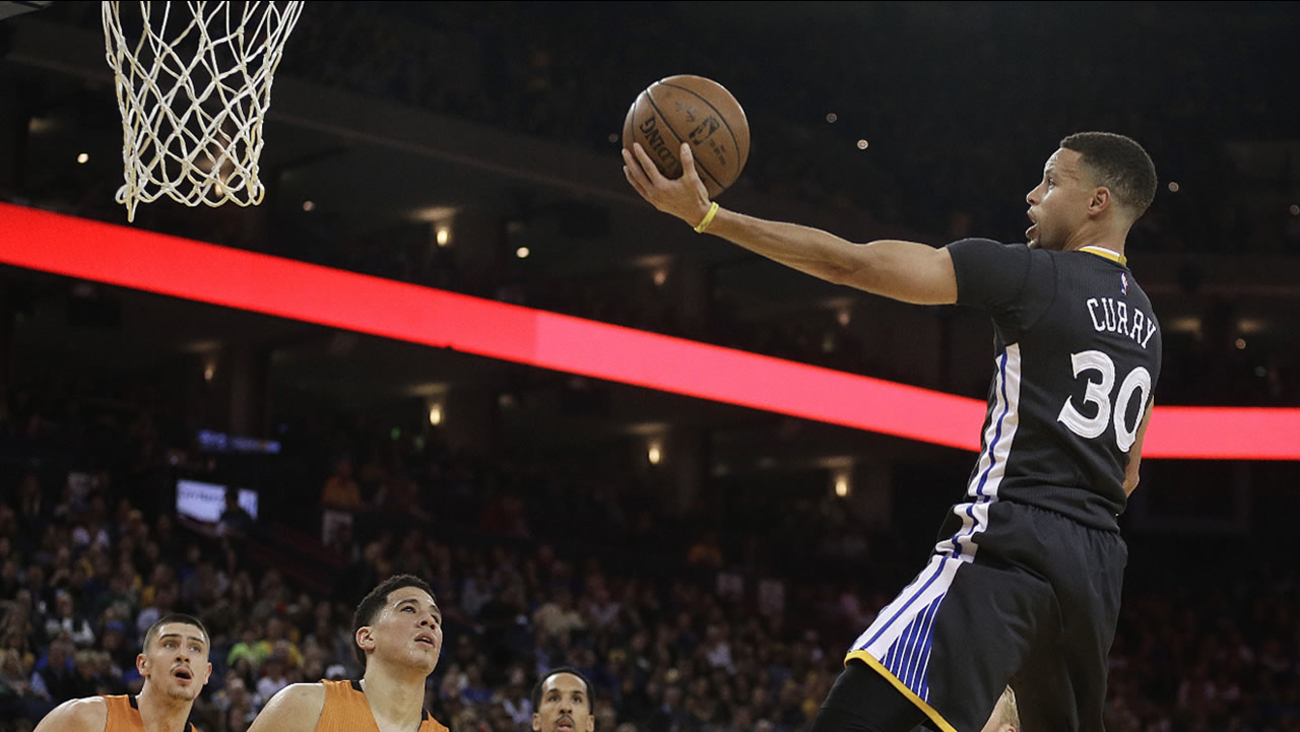 Golden State Warriors' Stephen Curry lays up a shot against the Phoenix Suns during the first half of their game on Saturday, March 12, 2016, in Oakland, Calif. (AP Photo/Ben Margot)

OAKLAND, Calif. -- Stephen Curry scored 15 of his 35 points in the fourth quarter and the Golden State Warriors rallied from a nine-point deficit over the final 12 minutes to beat the Phoenix Suns 123-116 on Saturday night.

Curry, who spent most of the third quarter on the bench in foul trouble, made three of his seven 3-pointers in the fourth, including two as part of a 18-8 run to close out the game.

The NBA's reigning MVP capped his night with a behind-the-back pass to Shaun Livingston for a layup that helped extend the Warriors' record home winning streak to 48 games.

The Suns trailed 68-58 early in the second half but stormed back to take a 95-86 lead heading into the fourth quarter.

Brandon Knight sparked Phoenix's burst with five of his career high-tying seven 3s. Knight, in his second game back after missing almost two months with a groin injury, finished with 30 points, seven assists and six rebounds.

Curry made two 3s sandwiched around a pair of dunks by Speights. Harrison Barnes then added two free throws to put Golden State up 119-108.

Alex Len and Knight scored on consecutive trips down the floor before Curry's jumper slammed the door on the Suns.

TIP-INS:
Suns: Knight had missed 21 games with a left adductor strain. . Phoenix went into the game leading the NBA with 22.6 fouls a game and was hit with 30 fouls against Golden State. . Len has 10 or more rebounds in a career-high eight straight games. The 7-1 Ukrainian had a double-double before halftime with 17 points and 10 boards. . The Suns have lost seven straight to the Warriors.

Warriors: Andre Iguodala's sprained left ankle is serious enough that the team has decided to shut down the veteran forward for the next two weeks. Iguodala, who hurt his ankle in Friday's win over Portland, will be re-evaluated then before a decision is made what to do next. "It's a big loss but we have a deep team and guys ready to step in for him," coach Steve Kerr said.

UP NEXT:
Suns: Host Minnesota on Monday.
Warriors: Host New Orleans on Monday.