Plus, the iconic Hollywood sign installation will temporarily be altered to read, "Rams House."
KGO 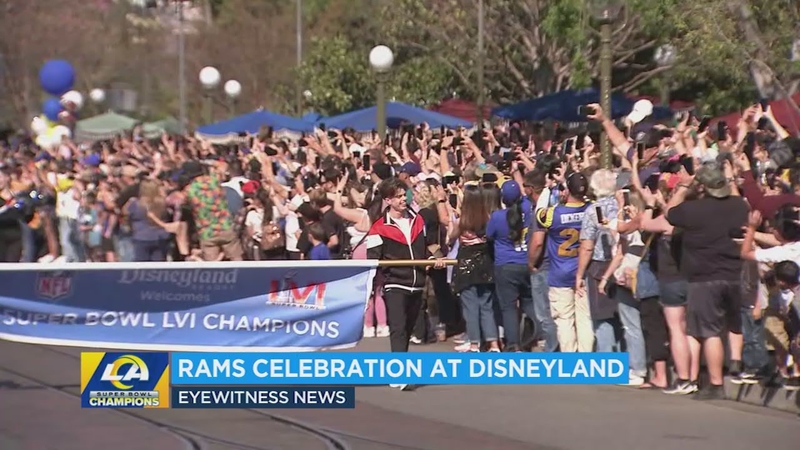 The three stars were honored with a fun-filled day at Disneyland Resort in Southern California that includes a special victory parade.

A thrilling late touchdown drive gave the Rams a 23-20 win over the Cincinnati Bengals, marking their first Super Bowl title ever in Los Angeles.

On Monday, the iconic Hollywood sign installation will temporarily be altered to read, "Rams House."

Stafford tossed a 1-yard touchdown pass to Kupp with 1:25 remaining and the Rams rallied to beat the Cincinnati Bengals 23-20 to win the Super Bowl at home in their glitzy, $5 billion stadium built by owner Stan Kroenke.

They had no other choice, really.

The organization went all-in to win it all, trading a slew of draft picks to acquire Stafford and Von Miller in 2021 and Jalen Ramsey in 2019. They also signed Odell Beckham Jr. during the season.

The Rams haven't had a first-round pick since selecting Jared Goff No. 1 overall in 2016, and they don't own another one until 2024.

But they now have a Vince Lombardi Trophy to show for it.

"I think it's a lot of good decisions stacked on one another," coach Sean McVay said. "I'm just really pleased to be associated with a group that is not afraid to shoot their shot and take chances on things we feel like is in the best interest of the football team. There are a lot of rolled eyes at us, but we believe in those things and we're going to do things that we think are in the best interest."

"Whether it's myself, Les, Kevin, Tony Pastoors and it all starts with Mr. Kroenke and his trust and willingness," he said. "Then the players being able to on-board the guys in the right way, it's sweet and I'm really happy for these guys."

The Rams became the second team to play a Super Bowl in their stadium, following the Tampa Bay Buccaneers in 2021. Both did it with veteran quarterbacks in the first season with their team. The Buccaneers went all-in, signing Tom Brady, Rob Gronkowski, Leonard Fournette and Antonio Brown. They got their title. So did the Rams, who eliminated Brady and the Bucs in the divisional round after wasting a 27-3 lead.

Stafford hadn't won a playoff game in 12 seasons with the Detroit Lions before leading Los Angeles to four postseason wins, including three straight by three points.

"I love playing this game for the competition, for the relationships, for the hard times, for the good times, for all of it," Stafford said. "This game can teach us so much as people. I get to go to work with people from all walks of life and come together and go for one goal, and for 12 years that goal wasn't reached. It tore me up inside, but I knew I could keep playing and try to find a way and the fact that we reached that goal today is so special."

Fittingly, Donald preserved the lead by pressuring Joe Burrow into throwing an incomplete pass on fourth down in the final minute as the Bengals were trying to drive for a tying field goal. The Rams' dominant defensive line had seven sacks, six in the second half. Donald and Miller led the way with two each.

"It means everything. This organization drafted me eight years ago to have an opportunity to help bring this here," Donald said. "To start in St. Louis and have our struggles and then come to L.A. and be able to build something special, bring in Coach McVay - one thing I told him when he got here, before I had the opportunity to play for him and get to know him, I told him as long as he's here, I want to continue to be a part of this organization and help build on the legacy. We're building a legacy. Legacies are built not from individual stats, but from team success. The ultimate goal is to be a world champion, I've been saying that for the past few years. To finally get the opportunity to feel this, be living in it right now, this time, this moment - it's hard to put it in words right now."

Even losing Beckham to a knee injury wasn't going to stop the Rams. Their offense slowed down after Beckham went down, but Stafford and Kupp came through in the end.