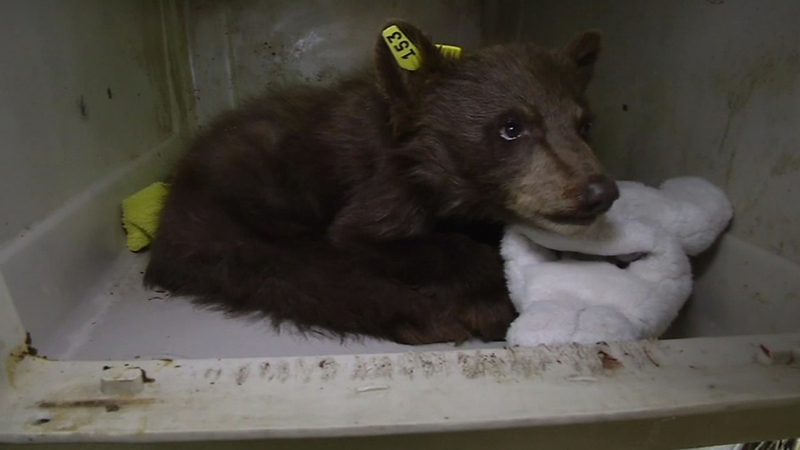 SOUTH LAKE TAHOE, Calif. (KGO) -- The Lake Tahoe Wildlife Care center is packed with orphaned bear cubs right now; the most they've ever had this early in the summer. The cubs are getting great care. But why there are suddenly so many is a mystery.

There are nine orphaned bear cubs at the wildlife center right now. This is the only place in California licensed to care for wild cubs, and they just keep coming.

"It's just been nonstop the last month," said Tom Millham, who runs the wildlife center with wife Cheryl Millham.

The newest arrival, named Brockway, was given a sedative by the vet so he could get a full medical exam. The little cub was found near his mother's body north of Lake Tahoe. A Good Samaritan left him with a note a volunteer organization called the BEAR League. The California Department of Fish and Wildlife gave to the okay to transport him to the wildlife center.

Brockway is getting some fluids now and his prognosis is good.

The wildlife center is run by Tom and Cheryl, who've been caring for bear cubs for the last 14 years.

The bears there now are all five to six months old, from all over the state.

This summer, more bears than usual are showing up in populated areas because of the drought. But there's no way to know if that's why so many orphaned bears have been found.

"We just haven't learned to talk bear yet!" Tom said.

We introduced you to the first orphaned cub of the season last April. She was just 5 pounds and had to be bottle fed.

The goal with all the cubs is to release them into the wild.

So now, three months later, she's not getting any human contact. We did get a peek at her through a window, though. She's up to over 20 pounds, but still has not cozied up to the other cubs.

"So we're still working with that and hopefully she's coming around," Tom said.

For the rest of the bears, it's actually a good thing to have so many there at once.

Most of the cubs are in good shape. But one little one had some serious tooth problems when she arrived. She had to have surgery and is being monitored with a video camera while she recovers.

"She's acting normally," said Tom. "She's eating most of the foods that we are putting in there, but we are on soft foods right now."

Food is one of the biggest concerns for the wildlife center right now.

"As the summer goes on and their appetites get more and more as they get bigger, it'll cost us about $100 per bear per week," said Tom.

The cubs get high quality fresh food so they learn to eat a natural diet. They won't be big enough to be released until winter, and the food bill will just keep going up.

And it could go even higher if more cubs come in.

The Lake Tahoe Wildlife Care center relies entirely on private donations and they could really use help with their bear food budget. To make a donation, click here.