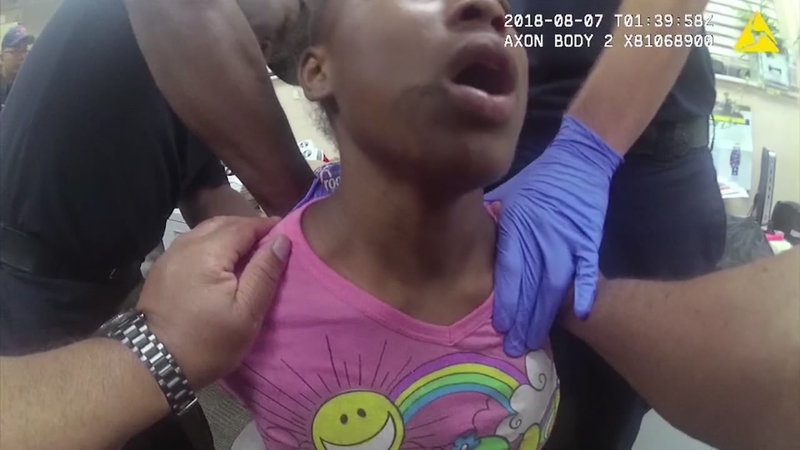 CINCINNATI, Ohio -- An Ohio police officer is in trouble with his department after using a Taser on an 11-year-old girl accused of shoplifting.

The incident happened around 9:30 p.m. Monday.

Officers said the child resisted arrest and tried to run away before they deployed the Taser.

Moments after shocking the 11-year-old with a Taser, Officer Brown escorted her back into the Kroger store where she and two other juveniles reportedly stole more than $50 in food and clothing.

The situation was captured on Officer Brown's body camera.

"Sweetheart. The last thing I want to do is tase you like that. When I say stop, you stop. You know you're caught. Just stop. That hurt my heart to do that to you."

The child was charged with theft and obstruction of justice, police said.

The 11-year-old was taken to Children's Hospital after the event and was released to one of her parents.

RELATED: Police not charged in death of man shocked 18 times with Taser in shower
Vice Mayor Christopher Smitherman told WLWT-TV he launched an investigation to determine exactly what happened.

Lt. Steve Saunders with CPD said their guidelines allow them to use a Taser on anyone 7 and older.

In a statement, police Chief Eliot Isaac said, "We are extremely concerned when force is used by one of our officers on a child of this age. As a result we will be taking a very thorough review of our policies as it relates to using force on juveniles as well as the propriety of the officer's actions."

The police review says Officer Brown violated policy first by not warning the girl about the Taser. The review also found Officer Brown didn't turn on the camera in time, and expressed a prejudice concerning race.

Officer Brown: "You know what sweetheart? This is why there aren't any grocery stores in the black community, because of all of this going on."