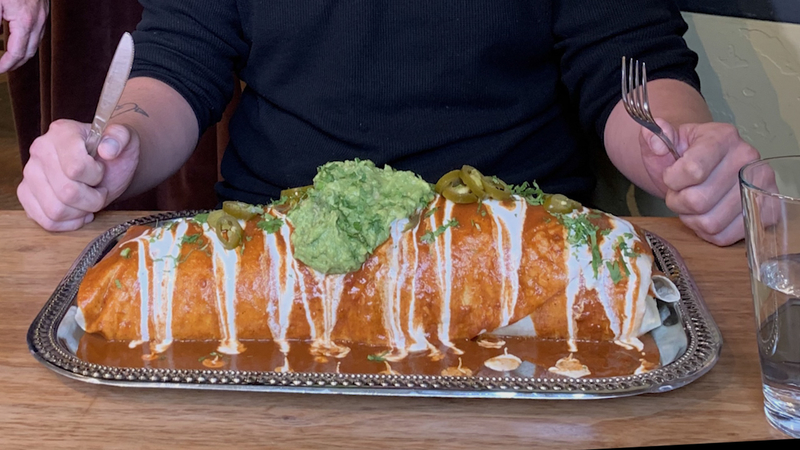 Then, the 'El Jefe' five-pound burrito challenge at The Prickly Pear Cantina in Danville may be just the Bay Area food challenge for you.

The rules to the "El Jefe" challenge are straightforward. You must devour the burrito which is composed of five tortillas wrapped around five pounds of carnitas, chicken tinga, beans, rice, and cheese and topped with enchilada sauce, guacamole, and sour cream.

All of that has to happen in 45 minutes or less and then the $45 burrito is free!

"I have people come and eat and they say that it is the easiest challenge because it is delicious," said Worth.

But Worth says only about a dozen people have been able to eat 'El Jefe.'

Many, included Jon Cabrera of Antioch, have tried and failed.

"Oh, I would definitely come back and eat a regular size burrito!"

The Danville restaurant opened ten years ago and was inspired by a visit to Cabo San Lucas in Baja California, Mexico.

"There wasn't a great Mexican restaurant here at the time," said Worth.

He fell in love with the picturesque setting for the restaurant in Danville's Blackhawk Plaza.

"All of our produce is brought in fresh, daily within 100 miles. We are using as many organic vegetables as we possibly can."

Worth now owns five restaurants in the Bay Area, including The Peasant & The Pear and The Little Pear in Danville, Worth Ranch in San Ramon, and The Peasant's Courtyard in Alamo.

Up for the 'El Jefe' challenge? Visit The Prickly Pear