EXCLUSIVE: Livermore family upset they were flown to Paris after attacks 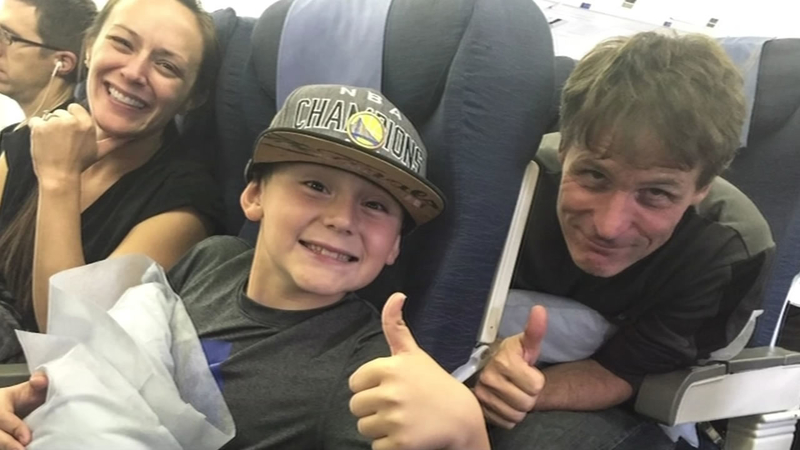 EXCLUSIVE: Livermore family upset they were flown to Paris during attacks

LIVERMORE, Calif. (KGO) -- From Livermore to Paris and back in 36 hours - if it isn't a World Record, it was certainly an ordeal with some very strange mitigating circumstances for the family of a young rockstar.

United Airlines is defending itself after criticism from a Livermore family upset that the airline delivered a planeload of people to Paris after the terrorist attacks.

In a story you'll see only on ABC7 News, the family flew thousands of miles only to return home in shock.

It's one of the shorter trips that Jessica Garcia, her husband Alfredo and their son Jacob have taken in the past few days.

#2paris&back Jacob and his mom never left the airport. 11 hours to get there, 4 in Paris, 16 home. pic.twitter.com/vkC4fu3sim

What we can only describe as an odyssey began last May, when they went to see their favorite band, U2, perform in San Jose.

Before the concert, lead singer Bono singled out Jacob from the crowd. "Where are you? I am finding you in city of blinding lights, OK?" he said to the boy.

Jacob was on stage with Bono in front of thousands of people at the SAP Center. The look on the faces of his parents was disbelief as Jacob did the Bono roar in a move that would send the video viral.

"I saw a lot of people saying my name, Jacob, Jacob," Jacob said.

#2paris&back Son Jacob had wowed the @u2 crowd at a concert in #Sanjose last may. Won trip to Paris to join band. pic.twitter.com/FwctrPrufm

Jacob's stage presence won the family an invite from the band to fly to Paris last weekend for a repeat performance.

As the United flight left, it was bad timing, to say the least. And now a bad taste. "Other flights were grounded. They did not take off. Other contestant winners didn't take off. We did," Jessica said.

The family landed in Paris 11 hours later. The concert had been cancelled and U2 arranged for the Garcias to return home immediately.

Passport stamps from the airport show a four-hour stay.

"You don't know who has got what. It's just very scary, especially having our son there," Alfredo said.

For Jessica, there was one looming question. Knowing the situation in Paris, why did United continue to fly them there at all?

"They should have given us the option to get off the flight. They should have grounded us in the United States, in Canada, in London, any of that. I felt like we were being flown into a war zone," she said.

To Paris and back in 36 hours, with an asterisk. At least Jacob can say he's been there - sort of.

United Airlines said Friday afternoon that they had not heard about the family's complaint. A spokesperson said, "We were fully aware of what was happening. Degualle Airport was open. Officials said it was safe to land and operate."

We learned about this story through a viewer email. You can tell us what's happening where you live by emailing ABC7listens@kgo-tv.com.

#2paris&back Alfredo and Jessica Garcia left for Paris to see their son on stage in concept with @Bono and @u2 pic.twitter.com/GG9JA3iUPw

#2paris&back Family knew that United Airlines knew of the attacks. Flew on. Now they would love a refund. pic.twitter.com/zXHZapyoVt