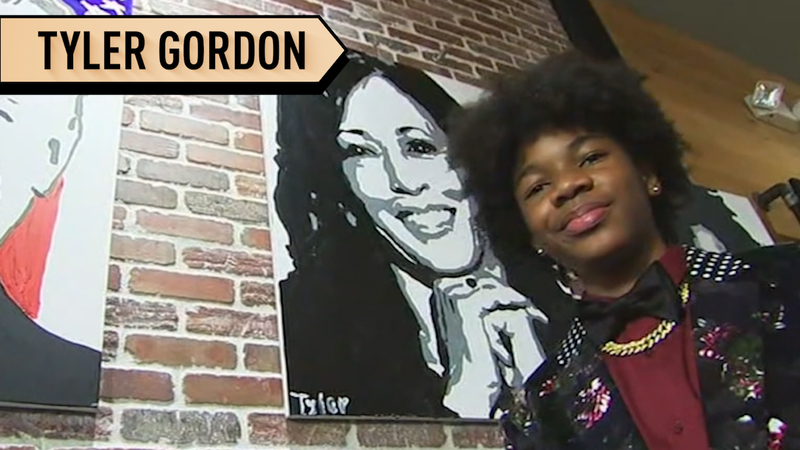 LOS ANGELES -- At only 14 years-old, Tyler Gordon's gift of painting is already getting him some prestigious awards and recognition.

"I usually paint what inspires me or what is changing the world," said Gordon.

He discovered his amazing talents four years ago when he entered a portrait of his school principal and ended up winning the STEM fair art contest.

"Art is important to me because it helps me speak without talking, and it helps me express what I'm feeling onto the canvas," said Gordon.

The young artist recently got a surprise call from Vice President-elect Kamala Harris after retweets of her portrait created by Gordon went viral.

"It's a very special thing to be an artist like you are," said Harris over the phone, leaving Gordon shocked. "It's a gift you give so many people. People you'll never meet are going to be touched by the work you do."

"The reason why I painted Kamala Harris' portrait is because she's one of the first of many, she's broken through tons of barriers," Gordon told Localish LA. "And me, myself, I've broken tons of barriers -- with my stutter, me being deaf until I was six and being in a wheel for two years."

You can see Gordon's inspirational images at the Beverly Center in Los Angeles. The "Heirs to the Throne" exhibit runs until the end of the year.