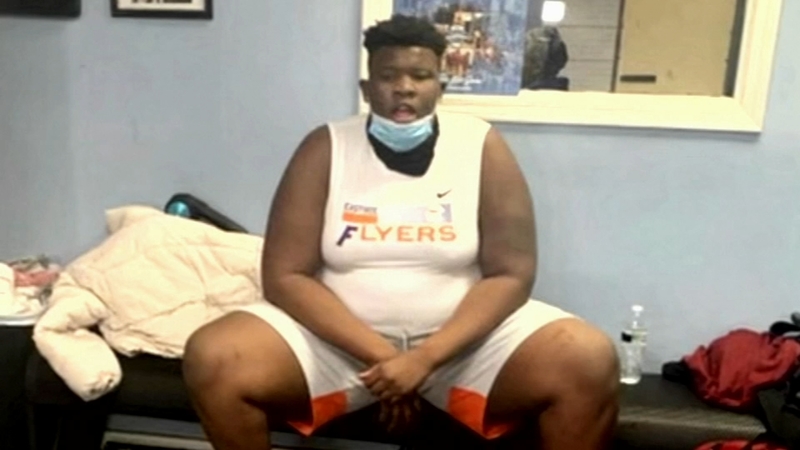 ORLANDO, Fla. -- A month after a 14-year-old plummeted to his death from a Florida amusement park ride, his family is suing a bevy of defendants, saying a series of mistakes put visitors in danger and led to their child's fatal fall, CNN reported.

Tyre Sampson was visiting ICON Park on March 24 when he got on the Orlando FreeFall drop tower ride, described by its operators as the world's tallest freestanding drop tower. It sends passengers up and then drops them nearly 400 feet at speeds reaching more than 75 mph, according to the park.

Horrific bystander video shows Tyre -- who weighed about 380 pounds, the suit states, and was known to loved ones as a "gentle giant" -- slipping out of the ride and falling to his death.

A harness sensor in Tyre's seat had been "manually loosened, adjusted and tightened," allowing for a greater gap than normal between his harness and his seat, an investigation by a forensic engineering firm commissioned by Florida officials found.

Defendants in the lawsuit, filed Monday in state court, include ICON Park; SlingShot, which owns and operates the Orlando FreeFall; the ride's manufacturer, Austria-based Funtime Handels; and the manufacturer of the seats and harnesses, Germany-based Gerstlauer Amusement Rides.

SEE ALSO | Video of Tyre Sampson falling is one of the worst tragedies he's ever seen, attorney Ben Crump says

Last week, ICON Park said it is "deeply troubled that the preliminary findings of the state's investigation indicate a sensor on the Orlando FreeFall attraction, which is owned and operated by the SlingShot Group, had been mis-adjusted after the sensor was originally secured in place."

"ICON Park is committed to providing a safe, fun experience for families. We will continue to support the Florida Department of Agriculture and Consumer Services with their ongoing investigation," the statement read.

Orlando SlingShot attorney Trevor Arnold said last week that "all protocols, procedures and safety measures provided to us by the manufacturer of the ride were followed."

Funtime Handels and Gerstlauer Amusement Rides did not immediately respond to CNN's requests for comment.

A metal detector, but no posted weight limit

There were no clear weight limits nor scales at the ride site, even though the ride tilted about 30 degrees forward, the suit states.

Michael Haggard, the attorney representing Tyre's mother, Nekia Dodd, said he was appalled by that omission.

"The manufacturer in the manual says right there and then that you cannot be over 287 pounds. Yet they don't provide a scale. They don't tell the ride operator you need to have a scale, if weight is in question," Haggard told CNN on Monday.

"Yet at this ride in Orlando, the FreeFall ride, they have a metal detector. So you go through a metal detector, which there's no risk of that associated with the ride, except maybe the keys could fall out and hit somebody."

A seat belt system would have helped, lawsuit says

"While most free fall rides of this type have both a shoulder harness and a seatbelt, this subject Free Fall ride only had an over-the-shoulder harness to 'secure' riders," the lawsuit states.

To outfit the ride with the seat belt combination, "All of the seats combined would cost approximately $660," according to the lawsuit. And that could have saved Tyre's life, Haggard said.

"What's really sad about this is that had they put the seat belt in, it would have cost $22 (per seat). You would have paid for that in two to three rides," Haggard said. "In one night, this would have been paid for and this would have never happened."

The lawsuit states "a reasonable manufacturer, constructor, operator, distributor, designer, and supplier" would have installed a mechanism to stop operation of the ride if a rider's restraint was not properly secured and also not allow the sensors to be manipulated or adjusted.

Haggard said a similar free-fall ride at Dollywood -- which has temporarily closed in light of the Florida tragedy -- does include a lower restraint. Even though that ride is also capable of leaning forward, Haggard said, the operators have chosen not to tilt the ride forward for safety reasons.

Others have complained about the same seat, attorney says

The lawsuit blames several defendants for "allowing the ride, and particularly the seat into which Tyre was placed, to stay in service despite performance issues."

Haggard told CNN others have mentioned problems with the seat in which Tyre was riding.

"We've had a number of witnesses come forward who were riding in Seat 1 prior to the incident who have complained that they felt like it was loose, that it was different than the other seats," the attorney said.

"They can look across and see somebody else's is tighter than them. There were a number of complaints beforehand. Nobody fell out, thank God, but there were definitely complaints from previous witnesses that will testify."

What the family wants

Tyre's parents, Dodd and Yarnell Sampson, are seeking damages including the costs of medical care and funeral arrangements and compensation for the mental pain and suffering from the death of their son, the suit states.

The family has asked for a jury trial.