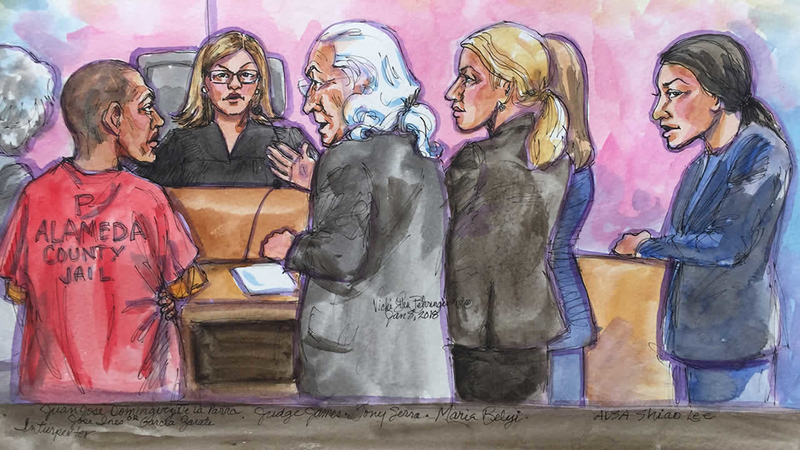 SAN FRANCISCO (KGO) -- Another chapter in the Kate Steinle murder case began Monday as the man acquitted in her fatal shooting was in federal court. The case has and continues to draw political debate over San Francisco's status as a sanctuary city and the fact that the shooter was here illegally.

For starters, the man now facing gun charges at the federal level surprised everyone by stating that his name was Juan Jose Dominguez de la Parra, not Jose Ines Garcia Zarate, his name during the Kate Steinle murder trial.

Court documents show that Garcia Zarate has used several aliases. " Because, you know, he's been convicted a number of times of re-entry, he's had different identities," said his attorney, Tony Serra.

The name Dominguez de la Parra is the one used in Texas for which he served time for unlawful entry.

From Texas he was brought to San Francisco on a pending drug case. But that case was dismissed and he was released.

"When he was released, it was incumbent upon him to report to the Texas probation department in 72 hours. He did not do that," explained Serra.

After the Kate Steinle shooting, a U.S. District Court in Texas issued a warrant for his arrest. He must now serve two years in Texas for violating the terms of his supervised release.

But that will be after he's tried in a San Francisco Federal Court on gun charges. He faces two charges for possessing a gun as a felon and for being an undocumented immigrant in possession of a firearm. He could get up to 10 years in federal prison.

The gun had been previously stolen and the jury seemed to believe Garcia Zarate when he said that he found the gun under a chair at Pier 14 and that it went off accidentally.

He has already served time for that gun possession conviction.

Serra will now claim double jeopardy if he can prove there was collusion between the feds and the local authorities to hurt Garcia Zarate's case. Serra has called the charges vindictive, an act of revenge by the Trump administration.

That will be Serra's second motion -- to try to get Garcia Zarate off. It's called vindictive prosecution, when there is retaliation against the defendant.

Click here for more stories on the Kate Steinle trial.

Jose Ines Garcia Zarate is now in federal custody and will be arraigned this morning for possessing (holding) the weapon used to shoot #KateSteinle. pic.twitter.com/X9ulytGgr1