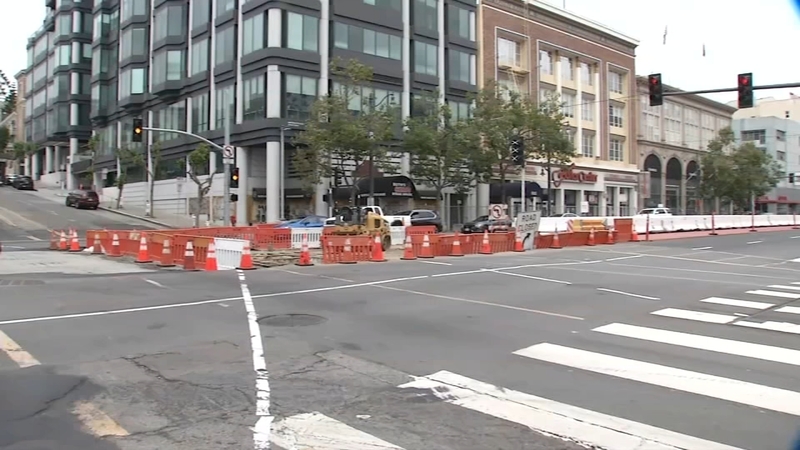 Report examines why Van Ness construction is taking so long

The project from Mission Street to Lombard Street will create San Francisco's first bus rapid transit system with dedicated bus lanes, improvements to boarding, and technology to keep buses moving. It will also replace a 100-year-old water main and sewer.

Businesses up and down the 2-mile stretch of San Francisco have long had a different name for Van Ness Avenue.

"It's a mess," said Farzin Kaveh who owns Audio Symphony.

"You can imagine with 5-6 years of construction a lot of us and including our friends and acquaintances asked the question why is Van Ness taking so long," said Simone Manganelli, Juror and Committee Chairperson for the Van Ness Investigation Civil Grand Jury.

The Civil Grand Jury's newly released report found that the cost of the project has increased to $346 million dollars, $37 million dollars over budget. Also that bus service is slated to begin in 2022, three years later than promised.

The City has said the delays were driven by unexpected findings under the surface of Van Ness, but the Jury found that the SFMTA could have lessened delays and cost overruns had it done more prior to the start of construction.

"In terms of the design, the planning, the contracting, the pre-construction process," said Manganelli.

The Civil Grand Jury found deficiencies on both the city side and contractor side.

On the city side, the jury found that while putting bus rapid transit lines down the middle of the lane will make transit times more smooth, it created delays because existing utilities like water and sewer needed to be moved to the side of the street.

The jury also found a lack of exploratory potholing by the city.

"Exploratory potholing would have helped them realize how different the official utility maps under Van Ness Avenue were compared to reality," said Manganelli.

On the contractor side, the jury found Walsh may have cost less up front, but not in the long run.

"Walsh and the city weren't working together on this contract in the way that they were supposed to," said Manganelli.

"They were all focused on resolving these issues of delays and timelines meticulously instead of trying to innovate and get the project proceeding," he continued.

Something which has not been lost on businesses suffering on Van Ness. I interviewed Kaveh in 2019 and again today.

"It's not a welcoming neighborhood anymore, people avoid it so as a business owner and other businesses, people are not coming this way and you can't blame them either," said Kaveh.

In an emailed statement, the SFMTA said, "We appreciate the work of the San Francisco Civil Grand Jury on the Van Ness Improvement Project. It raises certain issues identified in prior internal audits and we are actively working on incorporating lessons learned from those issues into successful projects throughout the City. The SFMTA has resolved multiple contractor claims relating to the issues in the report, including several where the contractor acknowledged its shortcomings. We regret that the report does not properly reflect the roles and responsibilities of a Construction Management General Contractor on a capital construction project as complex as the Van Ness Improvement Project.

Now that the underground work is done we are nearly on-time and on-budget for the surface component of the project. Our teams are applying lessons learned from the Van Ness Improvement Project to other projects in our SFMTA portfolio-including the successful Geary Rapid Project. The recent pace of construction for above ground work reflects the lessons learned by the contractor as well, and we look forward to working with them toward a successful final stage of this project."

Walsh did not respond to the I-Team's request for a statement.

Agencies identified in the Grand Jury's report have 60 or 90 days to respond. The Board of Supervisors will conduct a public hearing once those responses are submitted.