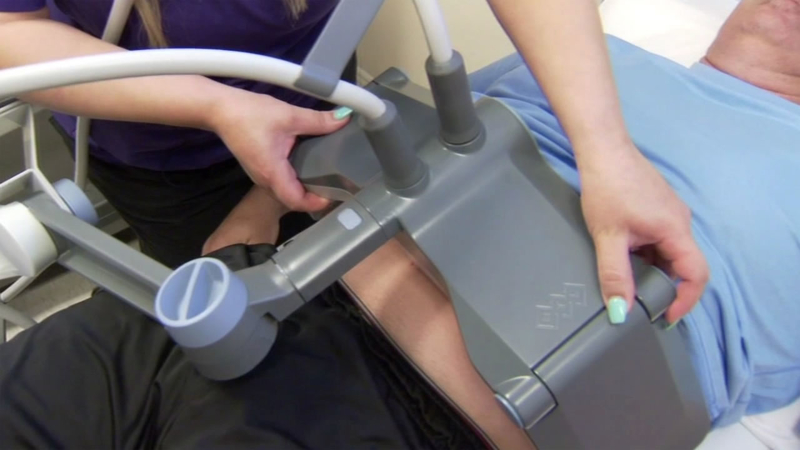 Nick De Benedetto is comfortable in his own skin. But it's what's under his skin, that has him looking at the latest technique for fat reduction.

"It's something I want to take care of, and I want to do," De Benedetto said.

The 43-year-old father of two, has worked to lose weight after suffering several injuries.

"I actually started running, did half marathons, did Tough Mudder races with friends and that kept me going and gave me motivation to exercise, but even after all of that, I wasn't satisfied with the outcome," he says.

De Benedetto still had a few stubborn inches around his mid-section, but then he heard about Vanquish -- an FDA-approved, fat-reduction technique.

"It's for somebody who has those areas. They're exercising, they're eating well, but they just can't get rid of those certain areas," according to Dr. Uma Rao, M.D. of Modern Aesthetics.

Simply explained, radio frequency waves go through the skin to target the fat cells underneath. The body then rids itself of the destroyed cells.

Rao says patients typically need four to six treatments to achieve about 60 percent fat loss in the targeted area. Each Vanquish treatment takes about an hour. The heat waves do not harm the skin. De Benedetto says he doesn't feel any pain from the heat.

"Just like a radiant heat, almost like outside if you were laying by the pool," he says.

The four vanquish treatments cost about $2,000 at Modern Aesthetics in the Central Valley, and are also available at several clinics in the Bay Area.

De Benedetto says the price is an investment in himself.

"It's something I've wanted to do for a long time," he says.

Doctors say patients can continue to see results even after their last vanquish treatment and most patients can lose between two to four inches.