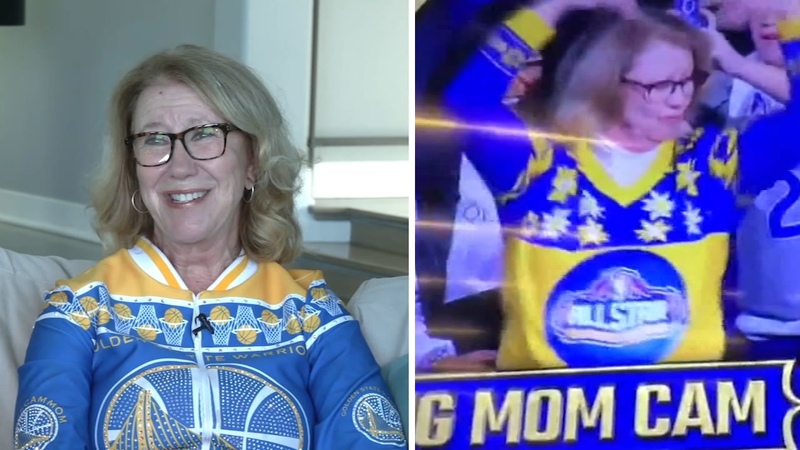 SAN FRANCISCO (KGO) -- The Golden State Warriors fans have a lot of celebrity and well-known fans, but there's only one Robin Schreiber.

The Warriors Dance Cam Mom was back tonight at the Chase Center cheering on her favorite team and we caught up with the super fan ahead of Game 5.

"It's fun going into the grocery store and taking selfies with people," Schreiber said. "Little kids will come up and say, 'you really have good dance skills, ma'am'. I just think it's a lot of fun."

Dub Nation is known to have some of the most energetic fans in the NBA.

But no one brings the energy to the Chase Center quite like Redwood City's Robin Schreiber, the Warriors Dance Cam Mom.

"When I'm on the jumbotron, it is amazing," Schreiber said. "The crowd just goes crazy, it's like Steph just hit a three-pointer. Sorry, Steph!"

The Warriors have played their way back to the NBA Finals and Robin Schreiber has danced along with them every step! I caught up with @dancecammom ahead of Game 5 to learn more about the @warriors super fan. This is what it looks like to be #GoldBlooded https://t.co/WpBmYpSo87 pic.twitter.com/OKXo84An5C

Schreiber has been a fan for decades dating back to the Rick Barry era. She knows everything about the team and has had season tickets since the 1980s.

"Obviously I'm not a bandwagon fan," Schreiber said. "I've been there through a lot of lean years."

Thankfully, today's Warriors give her plenty to dance about.

Besides her sweet moves, it's a Warriors Christmas sweater that Schreiber is known for- a gift originally meant for her son.

After putting it on, Schreiber said something came over her at a home game in 2016 and a legend was born.

"I don't know what made me stand up," Schreiber said. "But I stood up and the cameraman said, 'oh, here's an old lady!' and I was on and it just kept going."

The Dance Cam Mom is now almost as recognizable as any Warriors player as videos of her dancing have been viewed millions of times.

"He goes like, 'you know what? You need to stop that dancing'," Schreiber said. "I said, 'oh, okay'. And he continued, 'Because when you're dancing, it's during a timeout and they're supposed to be listening to me and they're watching you, so stop it'."

All kidding aside, the team feeds off the energy of the crowd and Schreiber is there to bring it every game.

She had her moves ready for Game 5 and she's expected good things.