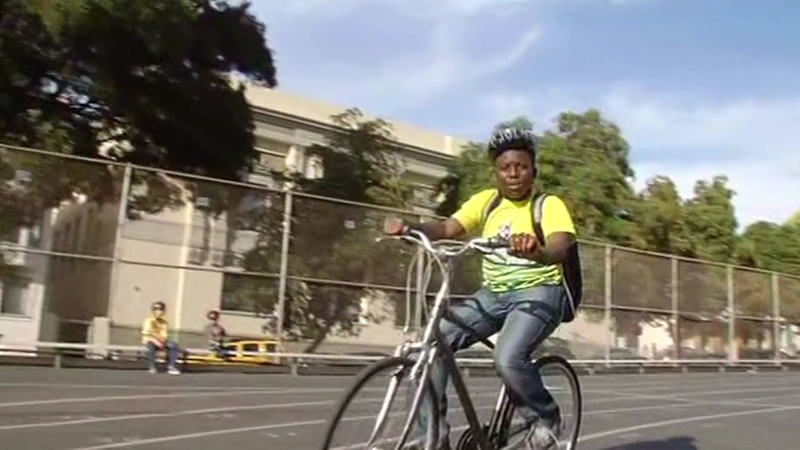 SAN FRANCISCO (KGO) -- Schools in Washington D.C. are teaching young kids to ride a bicycle at school as part of the curriculum for second graders. The idea is so innovative and practical that some Bay Area school districts are considering it.

Learning how to ride a bike is one of the after-school programs at Francisco Middle School.

But not every child is enrolled in the after school program. In contrast, all Washington D.C. public schools are now teaching second graders how to master bicycling and how to do it safely during the school day.

That district received enough donations to secure 1,000 bicycles that will rotate to every elementary school. Every kid is expected to learn during a four-week-long period.

The new program was presented to educators during a conference in Washington D.C.

Attending that conference was San Francisco school board member Rachel Norton who tweeted, "How cool is this. We should do this!" -- meaning all San Francisco public schools.

How cool is this: every 2nd grader in DC public schools will learn to ride a bike. @SFUSD_Supe WE SHOULD DO THIS! @GreatCitySchls #Inspired

The San Francisco Bicycle Coalition said they would support this kind of this program.

"This program in D.C. could be a model for the rest of the country in terms of reaching children where they are at and teaching them the skills they need to get out on the road safely on two wheels," said Chris Cassidy of the San Francisco Bicycle Coalition.

Parents who themselves bicycle back and forth say it's a lifelong skill while keeping kids in shape.

"There are many facets to cycling. There is a commute aspect, you know a day to day utilitarian thing and then obviously it's a sport too," said Matt Quann, a parent.

Another parent said it would help create a society that would commute to work by bicycle.

"San Francisco is very bike-friendly town and becoming even more and the benefits of it far outweigh any kind of negative," said Patrick Hems, a parent.