Water bottle warning: Can you start a fire if you leave bottled water in your car? 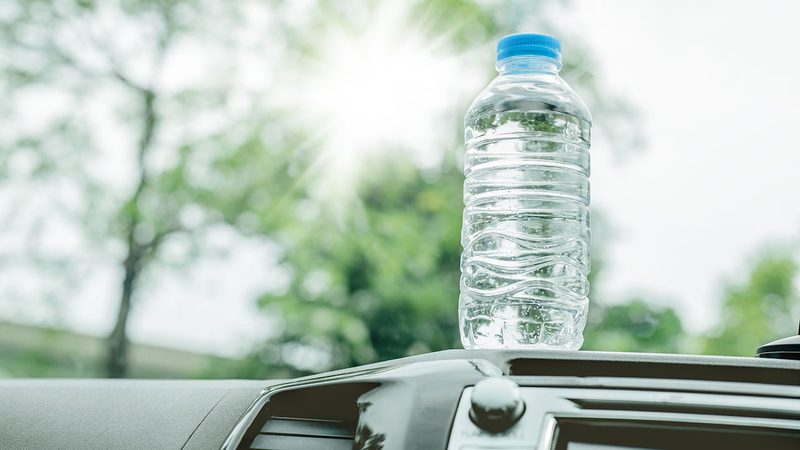 Water bottle warning: Can it start a fire in your car?

There's no doubt that it's important to stay hydrated as the temperatures rise in the summer months, but could leaving a bottle of water in your car pose a fire hazard?

That's exactly what happened to Dioni Amuchastegui, a technician with Idaho Power. In a widely circulated video originally posted to the company's Facebook page in July 2017, Amuchastegui detailed a close call he had after a bottle of water caused the seat of his truck to smoke.

"I was taking an early lunch and sitting in the truck. I happened to notice some smoke out of the corner of my eye, and I looked over and noticed that light was being refracted through a water bottle and was starting to catch the seat on fire," Amuchastegui explained.

The water bottle, Amuchastegui showed, was left in the path of direct sunlight coming through the driver's side window. It left two small burn marks in the seat, and Amuchastegui said the material was hot to the touch.

"It's not something you really expect - having a water bottle catch your chair on fire," he added.

But was Amuchastegui's experience a freak accident or an actual threat? A month after his original video was posted, the Midwest City Fire Department in Midwest City, Okla., put the water bottle scenario to the test.

Video posted by the fire department showed David Richardson successfully burning a hole through a piece of paper with a water bottle placed in direct sunlight, though Richardson warned that the experiment was successful due largely to a perfect storm of circumstances.

"This was a clear bottle with a clear fluid in it," Richardson said. "If this was empty or partially filled, it probably wouldn't have worked or magnified this. Keep in mind that all the factors have to be in place for this to work."

Amuchastegui's experience came amidst continuing speculation as to whether or not it is safe to drink water from plastic containers that had been exposed to sunlight for extended periods of time.

In a 2014 study, researchers from the University of Florida exposed 16 different brands of bottled water to 158-degree conditions for four weeks. Of the 16 bottles, only one exceeded EPA standards for the carcinogen antimony and bisphenol A (BPA) at the end of the trial, though researchers still cautioned against leaving water bottles in cars for extended periods of time.