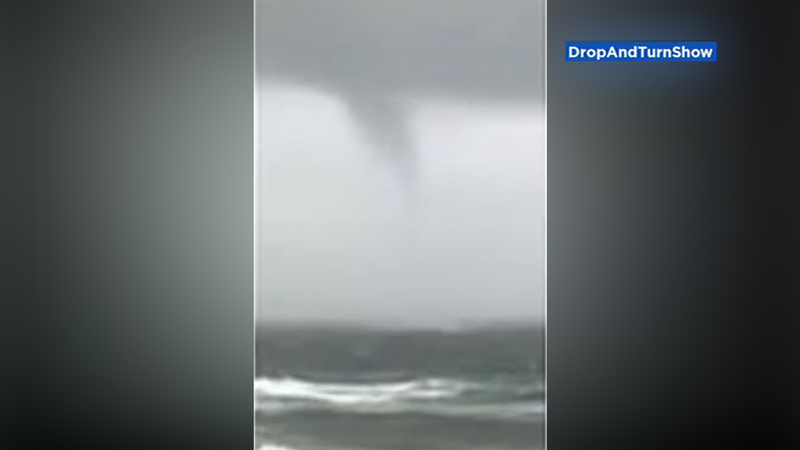 SANTA CRUZ, Calif. (KGO) -- Those along the Santa Cruz coastline got much more than scenic views and seafood on Sunday. The winter storm brought gusty winds and heavy rain.

According to the NWS report, a waterspout moved onshore along West Cliff Drive, just west of Woodrow Avenue. As it moved onshore, 65 to 70 mph winds picked up a construction sign and tossed it into a nearby mailbox.

"This is nothing compared to what it was that day," Lindsey Aquino-Robles said.

Aquino-Robles is an employee at Stagnaro Bros on the busy wharf. She saw the water spout make its way from the water, across the wharf.

"It went to the Dolphin and we could just see how the black portion flew off that way," Aquino-Robles said. The "black portion" she referred to is the roof of Dolphin Restaurant.

"And it just flicked the roof off, like it was a leaf. Threw it into the bay," witness Jon Bailiff said.

Bailiff is a former lifeguard who caught the action on his phone. He documented debris scattered across the Santa Cruz Wharf and into the water.

Bailiff said he was the one who alerted patrons and employees inside Dolphin.

"I came in, said, 'Do you know your roof just ripped off?' and they said, 'Well, we heard something,'" he told ABC7 News.

The restaurant remained closed on Tuesday.

RELATED: Powerful wind gusts up to 70 mph cause flooding, down trees, power lines across Bay Area

While Tuesday's storm conditions don't appear to be as violent as Sunday's, many are keeping their eye on the incoming storm.