What we know about the fires burning in the North Bay

The latest on fire size, acres burned and containment on the major 2020 Northern California fires
KGO
By Alix Martichoux
SAN FRANCISCO (KGO) -- Just as the massive lightning complexes of August were just about contained in the Bay Area, a new wildfire is threatening communities in Napa and Sonoma counties -- areas all too familiar with the threat.

The Glass Fire started at 4 a.m. Sunday and began spreading at a dangerously high speed, fanned by high winds. Overnight Sunday into Monday morning, the Glass Fire spawned two new fires: the Boysen and Shady fires. According to CAL FIRE, those smaller fires have since merged with the Glass Fire, forming one incident.

MAP: Track wildfires across San Francisco Bay Area, other parts of California with this interactive map

See the latest on Bay Area fire sizes and containment below:

How did the Glass Fire start?

An investigation team is on scene looking at the cause of the Glass Fire, as well as the two smaller fires that merged into it. "It's too early to tell exactly how this fire started but under these incredibly dry conditions with these gusty winds, it obviously didn't take much - a simple spark, an open flame - to allow this fire to grow," said Daniel Berlant, assistant deputy director at CAL FIRE, in an interview with ABC7 News Monday.

Unlike the fires that erupted around the Bay Area in August, dry lightning strikes aren't to blame here, as there were no storms in the area.

Where are evacuations being ordered?

Evacuations are being ordered in Napa and Sonoma counties, including Calistoga, parts of Santa Rosa and St. Helena. For the latest on evacuation orders and warnings, check here. As of Monday afternoon, more than 53,000 residents were evacuated.

What has been damaged or destroyed?

While CAL FIRE hasn't yet released an official number of structures destroyed or damaged, ABC7 News crews were in and around St. Helena Monday morning assessing the damage.

The Chateau Boswell Winery and the Glass Mountain Inn Bed and Breakfast along Silverado Trail in St. Helena have both been severely damaged by the Glass Fire, according to ABC7 News Amy Hollyfield on scene.

Are the LNU, SCU and CZU Lightning Complex fires still burning in the Bay Area?

This story will be updated as firefighters get blazes under control or new fires break out. Check back for updates.
RELATED STORIES & VIDEOS: 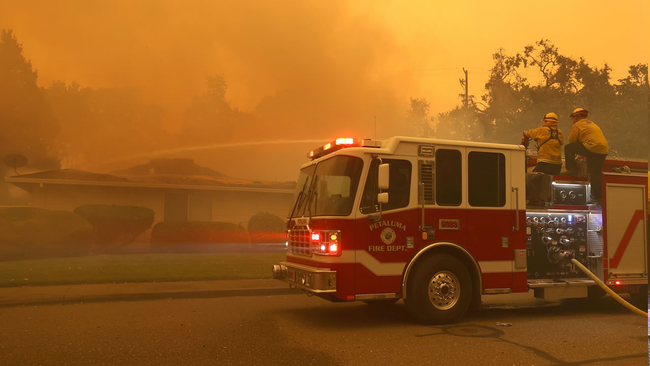