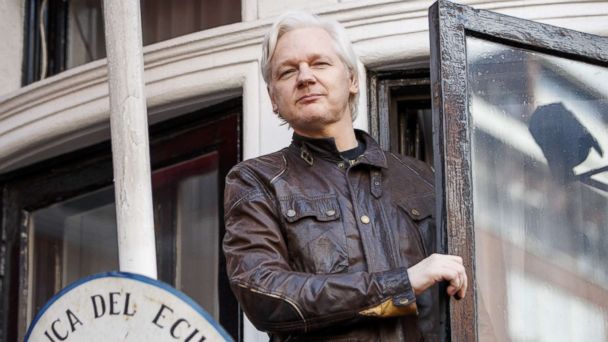 LONDON -- WikiLeaks founder and former hacker Julian Assange could be evicted from the Ecuadorian embassy in London where he has lived for six years while claiming diplomatic asylum, according to reports. The embassy cut off Assange's internet connections, computers and phones several months ago, though he still speaks with his lawyers.

Assange sought refuge at Ecuador's embassy in the U.K. in 2012, after he broke bail connected to sexual assault allegations against him in Sweden. Though the Swedish investigation was dropped in 2017, the U.K. warrant for his arrest on bail-jumping charges remains. As long as he remains in the embassy, he cannot be arrested by U.K. authorities.

The Ecuadorian president's recent trip to London included closed-door discussions with British officials, according to a report on Saturday from The Intercept. The agreement could lead to the embassy expelling Assange, at which point he would be handed over to authorities in London.

Questions remain about whether the British would extradite Assange to the U.S., where lawmakers have vowed to prosecute him for publishing hundreds of thousands of classified U.S. government documents.

Julian Assange, born in Australia in 1971, is a computer programmer by trade who has been involved in hacking schemes, including attacks targeting the Pentagon, the U.S. Department of Defense, NASA, the U.S. Navy and several private American companies.

In 2006, he founded the website WikiLeaks, which published secret information leaked to the site by whistleblowers.

Over the years, WikiLeaks has published massive dumps of unredacted diplomatic cables, thousands of which contained sensitive information that was not hidden, and classified intelligence documents relating to the wars in Iraq and Afghanistan. In 2007, it uploaded a U.S. Army manual for dealing with prisoners at Guantanamo Bay.

In 2010, it published a video that appeared to show a U.S. Apache helicopter firing on civilians and journalists in Iraq in 2007, which went viral. The Pentagon said that the crew at the time believed the targets were insurgents and not civilians.

One of WikiLeaks' main sources of documents was former U.S. Army intelligence officer Chelsea Manning, who was known previously as "Bradley" before transitioning to a woman. Manning was convicted by court martial and sentenced to 35 years in prison for more than a dozen charges, including under the Espionage Act. In one of his final acts as President, Barack Obama commuted Manning's sentence, paving the way for her release in May 2017.

The website also posted emails from one of former Alaska Governor Sarah Palin's accounts, the names and addresses of members of a U.K. far-right political party, the British National Party, as well as emails that were purportedly hacked from the Sony Corporation.

Assange's asylum at the embassy

In June 2012, Assange was living in the U.K., out on bail, and was wearing an ankle monitor when he rang the doorbell of the Ecuadorian embassy in London to ask for political asylum. He had just lost his fight against extradition to Sweden where he was accused of rape.

It's not clear why Assange chose to ask Ecuador, but then-President Rafael Correa had a strained relationship with the U.S. The year before Assange knocked on the embassy door, Ecuador was fuming at statements in the cables exposed by WikiLeaks that showed American diplomats believed he had knowingly hired a corrupt police chief. The U.S. ambassador to Ecuador was swiftly expelled.

The embassy granted Assange's request and allowed him to live there, which sparked a major diplomatic fight with the U.K. The Metropolitan police deployed dozens of officers outside Ecuador's embassy building ready to arrest Assange if he were to leave the premises.

He has not left the building since.