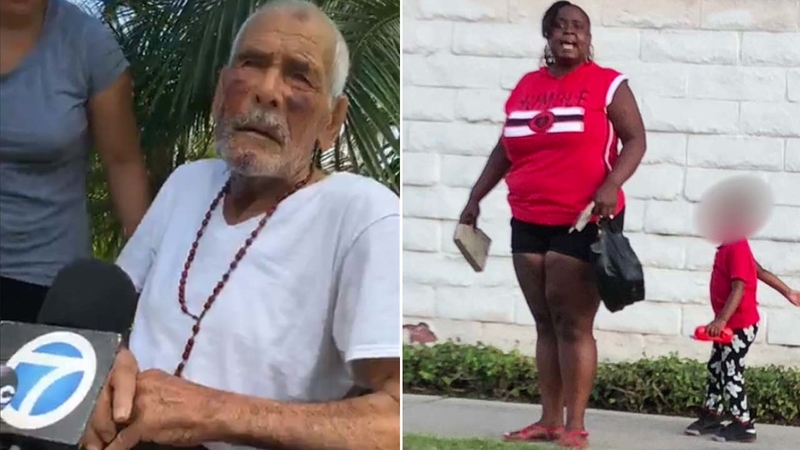 92-year-old man says he doesn't condemn, resent woman who beat him with brick

WILLOWBROOK, LOS ANGELES -- The 92-year-old man who was viciously beaten with a brick in Willowbrook says he does not resent the woman who assaulted him and wishes God's forgiveness and blessings upon her.

"She did hurt me, but I cannot be an enemy and say I condemn her," Rodolfo Rodriguez told Eyewitness News during an interview at his daughter's home on Wednesday.

Rodriguez was attacked on July 4 near the corner of 118th Street and Central Avenue. A witness, who recorded the aftermath of the attack, said Rodriguez was walking on the sidewalk and passed a woman, who got angry. The witness said the woman pushed him and struck him in the head with what appeared to be a brick of concrete.

A woman has been arrested in connection with a brutal beating of a 92-year-old man in Willowbrook, sheriff's officials said.

Rodriguez said he did not do anything to provoke the attack. Three to five young men were also present during the incident. Sheriff's officials are investigating their potential role in the assault.

Authorities are also looking into whether it was a potential hate crime. Witnesses told authorities they heard one of the attackers tell Rodriguez to "go back to Mexico." Investigators said so far that has not been substantiated.

While Rodriguez was getting assaulted, he could only hear people's voices but couldn't make out what his attackers were saying, he said.

The witness managed to snap a photo of that female suspect, who was later identified by the Los Angeles County Sheriff's Department as 30-year-old Laquisha Jones of Los Angeles. She was arrested Tuesday night.

Rodriguez said he is thankful that Jones was arrested, but he does not harbor resentment toward her or the other men. He said the law should take its course with regard to punishment.

"May God forgive her for what she did to me," he said, adding that he wishes God's blessings on the woman as well as himself.

He said he is grateful for the support he's received from the community and thanked the people who have helped him during this difficult time.

A GoFundMe page, with a goal of $15,000, was created July 6 to help pay for Rodriguez's medical treatment. As of Wednesday afternoon, more than $284,000 had been raised.

Rodriguez, who is a legal resident of the United States, travels back and forth between Mexico and the U.S. He was visiting family members in Willowbrook when the attack occurred.