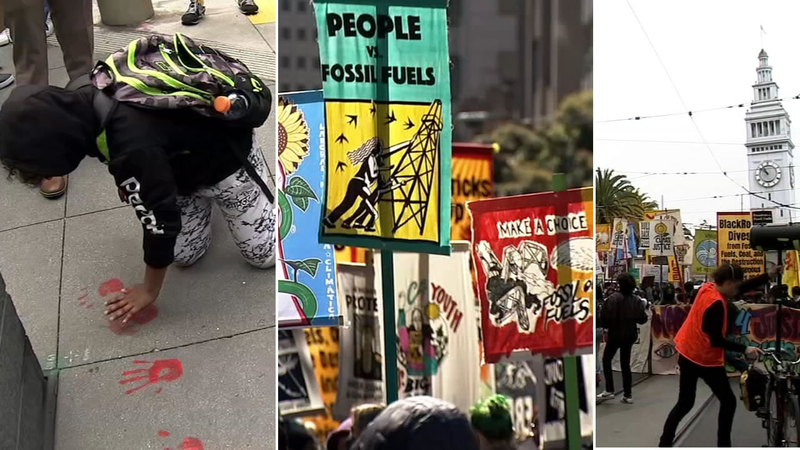 SAN FRANCISCO (KGO) -- A youth global climate strike is taking place in 85 countries and more than 500 cities around the world -- including San Francisco.

In all of these cities, young students left class to demand action against climate change.

RELATED: Earth's north and south poles are 50-70 degrees above normal

Dozens of youth across the Bay Area came to San Francisco Friday to participate in the local rally put on by Youth vs. Apocalypse at the Embarcadero Plaza.

"This is my home and I want to stay here," said Hannah Estrada, one of the protest organizers.

Protestors marched from the Ferry building over to two locations. The first location was outside Black Rock's office off Howard Street. Protestors claim the company invests in oil companies.

The second location was the immigration building.

At both locations, protestors covered their hands in red paint and left a mark outside the buildings.

"They have blood on their hands," Estrada said. "Climate justice and migrate justice are part of the same issue. We are telling them their days are numbered."

While joining others nationwide, those who attended Friday envision a future without having to worry about climate change.

"In 10 years these kids will be able to run for office," said Sofia Palau, another organizer. "If we can't make change here on the streets we will make change in congress in the future.