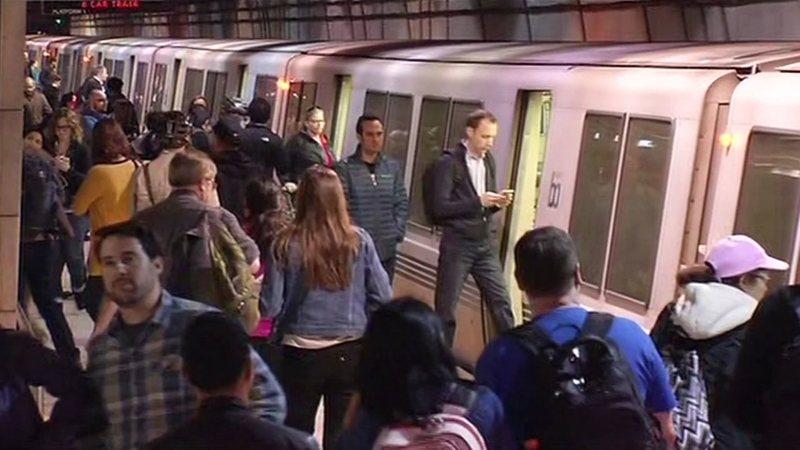 CONCORD, Calif. (KGO) -- BART moved a train between two East Bay stations that have been shut down the last three days, but there were no passengers on board.

This was all part of a test so the transit agency could figure out what's behind a mysterious power surge that's been damaging trains.

Despite the problems and delays, BART officials say ridership numbers have not been significantly impacted. With so many thousands of people relying on BART daily, those officials and city leaders say a bond measure is needed to fix the aging infrastructure. Still, they don't know if the old system is what's causing this new problem.

BART service remains closed between North Concord and Pittsburg-Bay Point, but on Friday officials had one test car running the span with an expert from the East Coast onboard.

"If we can at least identify the exact moment we're having the spike in voltage, it'll get us closer to cracking the code of what's causing this," said BART spokesperson Alicia Trost.

BART can't fix the problem until it identifies what's causing the problem. That's why the bus bridge will remain in effect through Monday.

The problem has put a spotlight on BART's aging infrastructure.

The same system has been in place 45 years

"We have not kept up in terms of modernizing the system, addressing its infrastructure needs, and the system is unraveling," said Wiener.

District #3 BART Director Rebecca Saltzman added, "I've seen track stamped 1968, so we really need to get out and repair and replace it."

BART's directors and local supervisors say a $3.5 billion infrastructure bond needs to pass in November. Even if it does, individual counties would still need to pony up money to replace the aging cars.

RELATED: BART unsure when service will resume between 2 stations

To expedite the process, BART is taking working thyristors from eight train cars, it's a move that will fix 30 to 40 train cars over the next couple of weeks.

All the delays are really starting to wear down BART passengers. Riders were more than eager today to share their frustration with ABC7 News.

"On a good day, my commute is about an hour and a half. But on a day like today it's like two hours," said BART rider Steven Anyanwu.

Fellow BART rider Kathleen Corey added, "It's the worst part of your day because you just don't know what's going to happen. It's usually every morning and every evening you have a problem."

Besides the track problem, BART also experienced delays Friday morning through the tube and also around the Daly City station due an incident that involved police.

BART mechanics tell us it will take five months for the replacement parts to arrive. BART says the tracks will be closed through Monday, at least.

"We've told the transit agencies that are helping with the buses to expect through Tuesday even," Trost said.

Uber is pitching in too. The ride-share company is expanding its car pool option, Uberpool, into the affected areas of the East Bay until BART gets back on track.

"One of the questions we asked is how do we provide lower cost options so people can more easily get from home to bart stations to work," said Wayne Ting, Bay Area general manager of Uber.

Also happening today: BART taking thyristors from 8 cars that will ultimately fix 30-40 cars over the next couple of weeks

Happening today: BART is running a test train from N Concord to Pittsburg/Bay Point w/expert on board to ID what is causing voltage spike

Spokesperson continues "However spotlighting our needs is always a good thing for the public to understand."

Another BART spokesperson says: "we do not..know..cause of..spike in voltage so..can not say if.. from aging infrastructure."