KGO
By by Janet O
CONCORD, Calif. (KGO) -- Another morning of frustration, delays, and bus bridges for BART riders; Friday was day three of no train service between two East Bay stations due to a power problem that damaged 50 trains. Some riders say this is the new normal.

BART riders told ABC7 News on Friday that the problems weren't so bad that morning as opposed to when this all first started because this time around they know what to expect.

"It is what it is and you just gotta make the best of it and roll with the punches," said one rider.

BART riders went about their morning as usual, except part of their new routine now includes hopping on a bus that runs between the Pittsburg-Bay Point and the North Concord-Martinez stations.

The buses have been packed with people all morning and have been running frequently to accommodate commuters. We took a ride for ourselves to see how long it would take.

Getting to Pittsburg from Concord took 10 minutes. Heading back to Concord took twice as long. The added time, transfer, and wait are causing some to bubble with frustration.

"Pissed off because they're not doing their job and we pay for it every day," said BART rider Ruth Clay.

BART says it could take 22 weeks to order parts to fix the damaged trains which would impact crowding in the months to follow. But the transit agency says it has no idea when service will resume between the two East Bay stations.

"I'll try to get used to it," said Michael Maze.

Late Friday morning, BART told ABC7 News that they do have experts now looking at the tracks between the two stations. They're hoping to get things fixed and up and running as soon as possible. But again, there's no timeline as to when that would happen.

BART mechanics tell us it will take five months for the replacement parts to arrive. 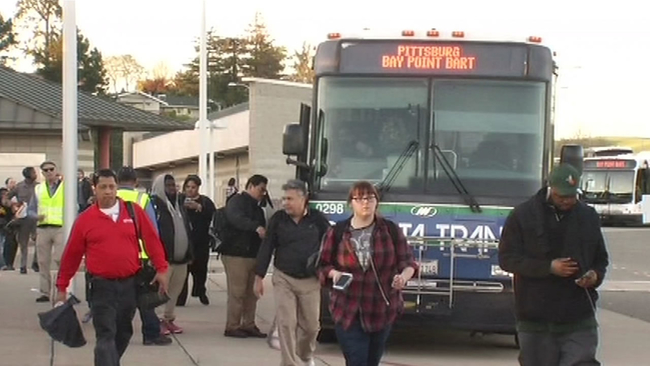