Texas woman in 'Juju on that chemo' viral video passes away

KGO
DALLAS, TX -- Ana-Alecia Ayala, the Texas woman who touched the hearts of millions across the internet with her "Juju on That Beat" viral video, passed away after a year-long battle with cancer on Wednesday.

Ayala was diagnosed with a rare uterine sarcoma in December 2015. She was undergoing her fourth round of four-day inpatient chemotherapy at Baylor T. Boone Pickens Cancer Hospital in Dallas after doctors found a new tumor on her spleen in July.

Doctors put her through a more aggressive chemo treatment that forced her to be in-patient for several days.

"In-patient treatment was rough at first," Ayala told News 8. "Being away from our 3-year-old was the hardest part. We had her birthday party in my hospital room in July, and the nurses came in and sang to her."

While Ayala was going through chemotherapy, she decided to have a little fun with a dance party in her hospital room. She and her friend Danielle Andrus were seen on video dancing to "Juju on That Beat" by Zay Hilfigerrr and Zayion McCall.

That video quickly went viral, and since it was posted on Facebook in October 2016, it has been viewed more than nine million times.

SEE ALSO: Woman with cancer shows the world dancing and laughter are the best medicine


Ayala and Andrus recorded several other dancing videos to help keep their spirits up.

"We want to show the world that dancing and laughter is the BEST medicine," Ayala wrote on her Instagram post. "Who says cancer and chemo have to get you down? We'll have the last laugh!!"

Ayala's sister told News 8 that she was surrounded by her loved ones and family priest when she passed away. She is survived by her husband and daughter.
Related topics:
societydallashealthviral videocancer
Copyright © 2020 KGO-TV. All Rights Reserved.
RELATED 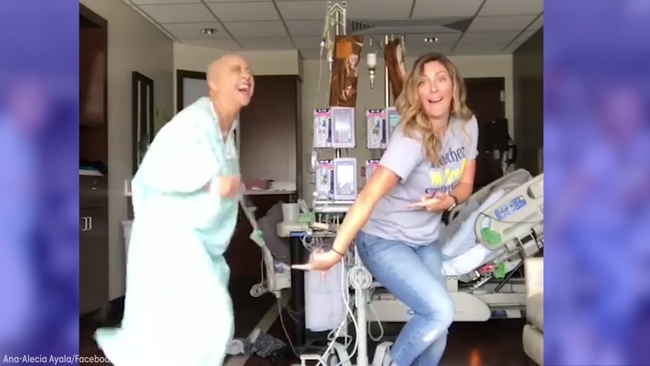