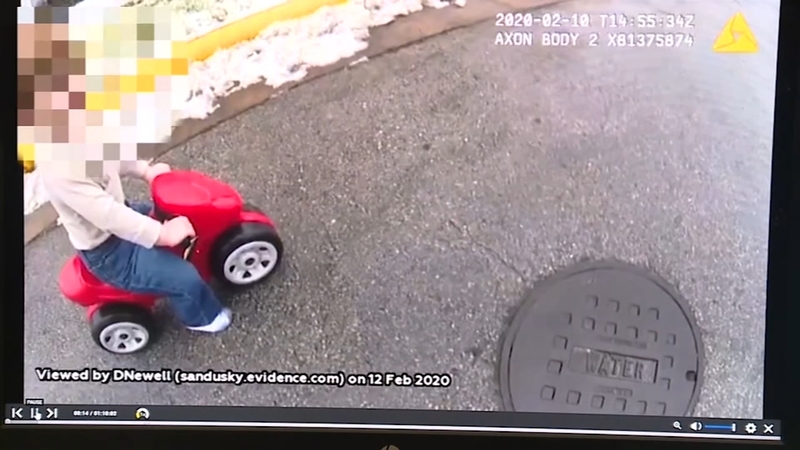 According to Sandusky Police Department officers, the boy's pants and socks were soaked and he was disoriented. He couldn't tell officers where he came from or how he ended up on the street.

Officer David West was the first to find the child.

"I really couldn't believe it, especially that time of the day and the temperature, barely dressed, just walking on this little scooter in the middle of the street," West said.

Police went door-to-door to find the daycare owner who officers said was watching six other children.

Officers said the front door of the home daycare had a deadbolt, but it was easily accessible for the toddler to reach up and open the door. According to Sandusky Police Department, four children have left the daycare on their own in the last five years.

"We tried to explain to her maybe some child proofing, door knob covers," West said. "if she's watching more than one kid, maybe get an alarm or something on the door so if the door opens there is a beeping sound."

Erie County Children's Services was called and the daycare owner was charged with endangering children. She pleaded not guilty to the charges against her, but if she is convicted, she could go to jail for up to a year.
Report a correction or typo
Related topics:
ohiotoddlerbicycleu.s. & worlddaycarechild endangerment
Copyright © 2022 KGO-TV. All Rights Reserved.
TOP STORIES
Bay Area's great migration is creating a 'Megaregion'
Sonoma resident says Airbnb visitors stole his cat
Couple devastated after stolen van found severely damaged in Oakland
EDD director resigns after just over 1 year in charge
Meet the man taking 49ers superfan to a whole new level
'We're taking the town over!': 49ers fans arrive in LA for NFC
49ers-Rams NFC Championship Game preview
Show More
How many times can I reuse my N95 mask?
Fraudulent rent relief claims divert funds from those in need
Anti-racist lawn libraries take hold in Bay Area neighborhoods
Some Bay Area counties begin easing COVID restrictions
10 injured in PA bridge collapse; human chain formed to help
More TOP STORIES News