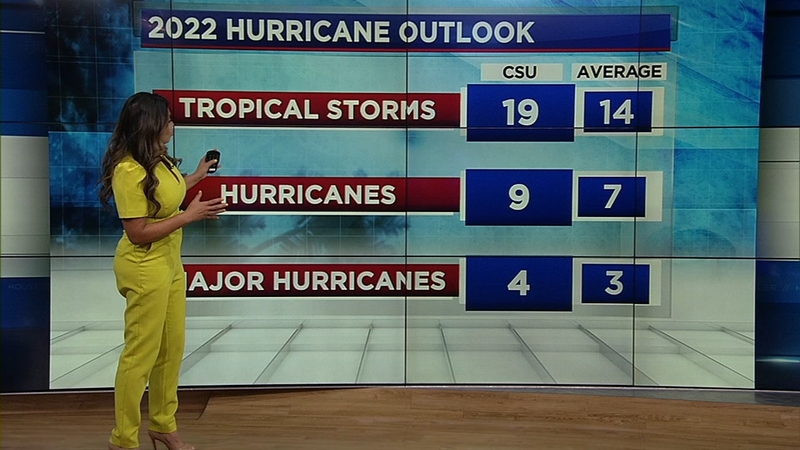 Klotzbach and the university released their annual outlook, which is calling for 19 named storms, nine hurricanes and four major hurricanes.

The reasons for the above-average forecast include the lack of El Nino and warmer than normal subtropical Atlantic temperatures.

One of the reasons for the above-average Atlantic seasonal #hurricane forecast from CSU is due to the likely lack of #ElNino this summer/fall. El Nino generally increases vertical wind shear in the Atlantic, tearing apart hurricanes. pic.twitter.com/ef5kiv56Ci

The chance for at least one major hurricane making landfall for the entire continental U.S. coastline is at 71%. The average for the last century has been 52%.

Of note for people here in Texas, the probability of a major storm along the Gulf Coast from the Florida Panhandle westward to Brownsville is at 46%.

Major hurricanes are storms that are Category 3, 4, or 5 and those windspeeds will be over 111 mph.

While hurricane season isn't here just yet, the forecast's release is a reminder that you should stay ready as it only takes one hurricane making landfall to affect lives.

You're urged to be prepared the same for every season, regardless of the predicted activity. A below-average Atlantic Hurricane Season was forecasted in 2017, which is the year Hurricane Harvey hit the Texas coast.

The most active season on record took place in 2020, when 30 named storms, 14 hurricanes, and 7 major hurricanes occurred.

The Atlantic hurricane season starts on June 1 and ends on Nov. 30. But in recent years, named storms have become common in May and even as early as April.