'We're taking the town over!': 49ers fans arrive in LA for NFC Championship game against Rams 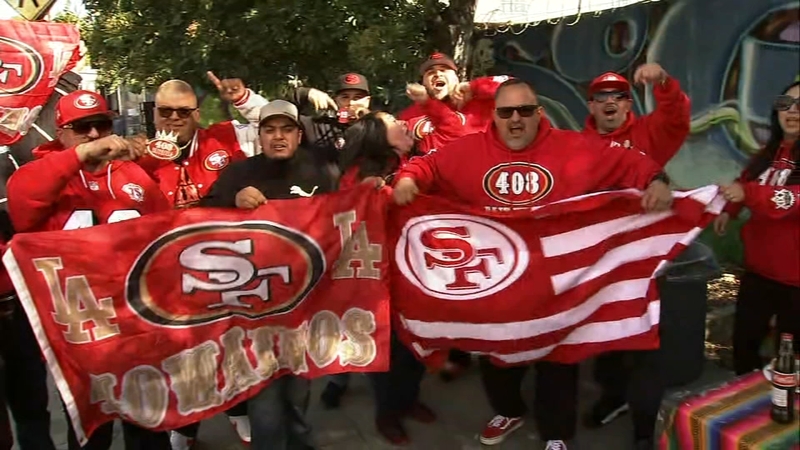 INGLEWOOD, Calif. (KGO) -- SoFi stadium is looking picture perfect less than two days ahead of the NFC Championship between the San Francisco 49ers and the Los Angeles Rams.

On Friday, our ABC 7 News crew was all over Los Angeles. Venice Beach, Santa Monica, but the most scenic location of the day came from SoFi stadium in Inglewood, site of Sunday's NFC Championship.

For some that meant a Friday of flying their Niners flags and driving from the Bay to LA. For others that meant a Thursday night of driving with the only acceptable interior lighting around, red.

"You think there will be a sea of red?" We asked Victoria Huaracha. To which she responded, "Sea? A Tsunami of red!"

This 408 Faithfuls Chapter says there will be a hundred 49ers fans deep come Sunday. They received quite a bit of reaction in route to SoCal.

"Most of the people were Niners fans giving the thumb up but we did get some Rams fan in there, giving us the birdie, and letting us know that it's their town. But we're here to let them know, we're taking the town over," said Jesse Mendez of 408 Faithfuls.

We go behind the lens with the San Francisco 49ers director of photography as they gear up for NFC Championship against Los Angeles Rams.

Sunday's NFC Championship may soon break a record by boasting the best selling secondary tickets of all time for a non-Super Bowl game and many we talked with haven't yet bought.

"Fans are just waiting for the price to drop right now so I think at the last minute it's going to change a lot," 49ers fan Abel Rueda.

49ers quarterback Jimmy Garoppolo has the backing of his teammates who throughout the year have praised his leadership, toughness, and overall play.

And yes, there will be some die-hard Rams fans at the game too.

"You were in the Bay for four years and you didn't transition over to be a Niners fan?" We asked to which the reply was, "No, no!" Harvey Katz going on to say, "The competitiveness between San Francisco and LA has been going on forever and ever and ever."

A competitive love, but just don't try to predict who the locals are rooting for.

"LA, we got die hard fans here. I appreciate the Rams coming back, it's a long time coming but I'm a die hard 49er fan. So absolutely I got my money and I'm doubling down on the Niners," said Anthony Johnson.

"All of a sudden, these Rams fans coming around and we got to stick to the Niners all day," said David Rivas.

Outside Levi's Stadium on Friday, crowds of fans came together to watch the 49ers team buses depart.

Outside Levi's Stadium on Friday, crowds of fans came together to watch the 49ers team buses depart.

In the sea of red and gold, fans waved flags, held signs and screamed- anything to get their message through the bustle of buses.

"I hope they get the inspiration," fan Patrick Garrison explained. "That we're here and they know we're here for them."

Liz Ramirez with 408 Faithfuls added, "They need to feel our big energy! We want this win!"