Faithful photographer: A snapshot of 49ers' memory-keeper during 2021 playoff run 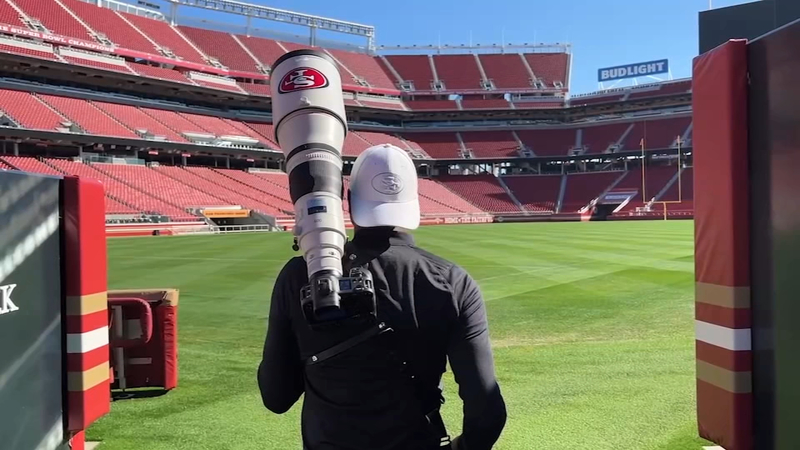 SANTA CLARA, Calif. (KGO) -- There are iconic moments in San Francisco 49ers team history that fans remember forever and many moments are happening this season.

One man is part of the team in charge of capturing them as they happen.

As the 49ers have battled into the NFC Championship game, iconic moments are captured each week that will live on in team history.

Moments captured by the 49ers photography team and their lead photographer.

A man known around the organization as T-Lloyd: the man behind the lens.

"Who would've thought, I used to cut pictures out and make my own 49ers books," 49ers Director of Photography and Lead Photographer Terrell Lloyd said. "I never thought I was going to be a photographer, but always had a love for photos and photography. To be the director of photography for the 49ers and the organization, it's one of those things where I don't take it for granted."

49ers quarterback Jimmy Garoppolo has the backing of his teammates who throughout the year have praised his leadership, toughness, and overall play.

Lloyd has been part of the organization for 25 years and witnessed some of the greatest wins in the biggest games.

He says it takes a lot more work and preparation than people think to create the perfect shot that fans remember forever, including some of the best post-game celebrations.

"It's about really capturing the essence of the game," Lloyd said. "When you look at it and you look at the celebration that they have after battling the whole game, and when you capture that moment, it's so surreal."

From his point of view, he remains faithful that this team may be on a super run.

"You've got to start to believe," Lloyd said. "My mindset is: I always take a positive attitude about everything. Even from my photos or from the team, if you stay positive, then good things are gonna happen."

And this season, so far so good.

As the 49ers prepare for the Rams, T-Lloyd's team is loading up their gear to capture another historic moment for the franchise.

"Heading into the NFC Championship game, it's like I mentioned earlier, it's about the journey, Lloyd said. "It's about having fun and having the memories of what you get to do as a profession. I'm going to take it all in. It's exciting, though, definitely exciting and a great opportunity."

And maybe an opportunity to capture more championship-caliber moments.