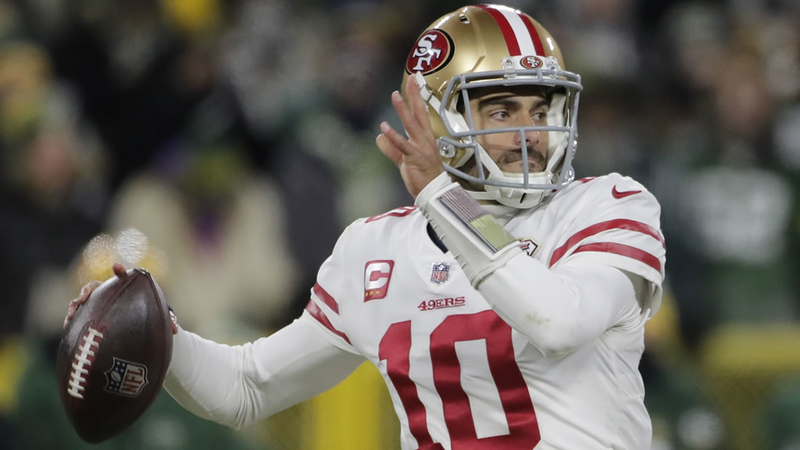 SAN FRANCISCO (KGO) -- From the moment the 49ers drafted rookie quarterback Trey Lance 3rd overall in the NFL Draft, it seemed as if Jimmy Garoppolo's days as the 49ers quarterback were numbered. Kyle Shanahan maintained early on that Jimmy Garoppolo was in starting quarterback for the 2021 season and now Garoppolo has the team on the doorstep of a second Super Bowl appearance in the last three seasons.

"Sometimes when it doesn't go the right way, yeah, it's disappointing," said 49ers head coach Kyle Shanahan. "But I can't tell you how many times that I don't think anyone's open and there is no play to be made and we need to make one or the game's going to be over and he finds a way to make it. And I'm not then saying, 'Hey, don't do that.' I'm thanking him for that. That's playing quarterback in this league, so it goes both ways."

Garoppolo has been a polarizing figure for the 49ers fan base, often with fans quickly wanting to pull Garoppolo in favor of Lance after a turnover or bad game. Garoppolo's injury history has also played a role, but despite missing two regular season games due to injury this season, Garoppolo has gutted it out, playing through thumb and shoulder injuries in the last 3 games all with win-or-go home scenarios on the line.

Garoppolo was asked during Wednesday's media availability how he blocks out all the critics, especially on social media.

We love ya Jim!! https://t.co/jbECXRvedg

"I think just knowing yourself and knowing who you are plays a big part of that, because if you get lost in it and start believing some of those things, it could take you down the wrong road," said Garoppolo. "So I don't know, I think it's just about knowing yourself as a player, as a person and as long as these guys in this locker room have faith in me and belief in me, that's all I really care about."

RELATED: 49ers aren't letting 6 straight wins over Rams get to their heads as team preps for NFC title game

The 49ers quarterback has the backing of his teammates who throughout the year have praised Garoppolo's leadership, toughness and overall play.

Kraxy how y’all have so much to say about our quarterback…. Check His Win Percentage…. Okay I’ll Wait. Pure Winner @JimmyG_10

"We're able to maintain trust in him because we keep winning," said linebacker Fred Warner. "He's not on social media looking at what everybody is tweeting about him. Who knows what he does outside the building? I don't know, but as soon as he comes inside this building he literally is the same exact person every single day no matter what. I think that's what we all respect the most, that he comes to work and is always trying to get better."

Garoppolo is currently 4-1 in his postseason career as the 49ers enter Sunday's NFC Championship game against the Rams.