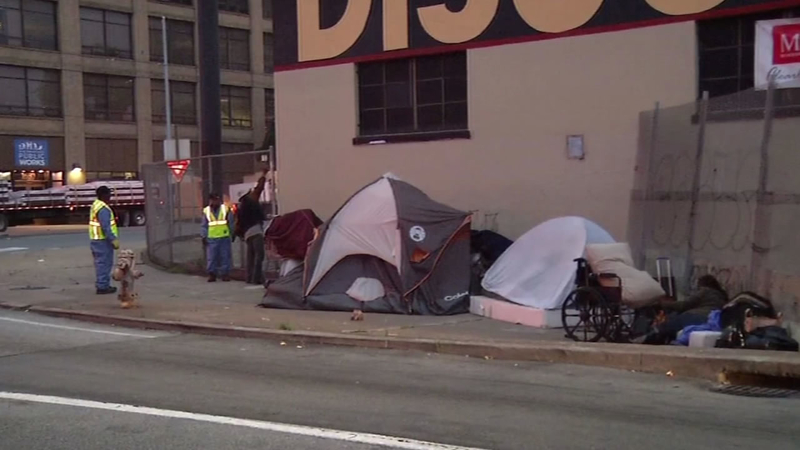 SAN FRANCISCO (KGO) -- Today is San Francisco Homeless Project Day and more than 70 media organizations, including ABC7 News are working together to focus on this crucial issue.

It's not moving day, just cleaning day at a homeless encampment at Duboce and Mission streets and the cleaning services are provided by-the city of San Francisco.


"We want to make sure if it's human waste, that if there are needles, if there's rotting food or soiled sheets or clothing that we that get up and off the streets. It's a health hazard if that happen," said Department of Public Works spokesperson Rachel Gordon.

These city employees are on the hot spots crew. They head out every day to haul away garbage from where the homeless are living, sweep the area and steam clean the sidewalk. They say a dark spot indicates urine. They steam clean it back to the original color.

"I feel like we leave it like that they could get sick with the fumes, so we come time to time clean it up," said Department of Public Works worker Edward Redd.

They're responding to a problem that seems to be getting worse. A map shows where complaints about human waste came from in 2011, there were 5,444. In 2015, that number nearly doubled to 10,151 calls.

"Our crews have seen rodents running out of tents and out of suitcases that are picked up," Gordon said.

The homeless said they don't seem to mind the crews, but are a bit surprised at how serious they are about it.

"How often they do it? Every day, 5 o'clock, 6 o'clock in the morning. They don't clean neighborhoods that much," said homeless resident Charles Bedford.

The city estimates that this cleaning service costs the taxpayers around $4.7 million a year.

"I know it costs the city a lot of money, but what is our choice fellow human beings," said Laurel Slomowitz.

Worker say they can't imagine how dirty it would be if they didn't do the cleaning. Workers say they haul 12.5 tons of garbage a week from these encampments.