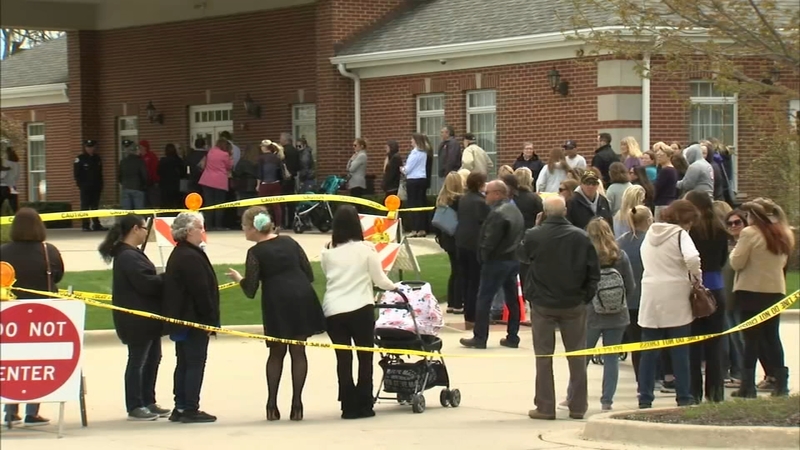 CRYSTAL LAKE, Ill. -- Thousands of people lined up Friday afternoon to say goodbye to AJ Freund, the 5-year-old Crystal Lake boy whose body was found in a shallow grave in Woodstock last week.

A long line of people waiting to pay their respects snaked outside of the funeral home and down the street.

A long line of people was present throughout the afternoon and evening as people waited to pay their respects. The line snaked outside of the funeral home and down the street. They brought flowers, held balloons, and carried stuffed animals, and just about everyone in the line wore AJ's favorite color, blue.

"We had shirts made in honor of AJ," said Amber Jeschke. "Our front says 'RIP AJ,' and then our logo on the back."

"My husband and I have put out over 3,000 ribbons to remind everybody of this tragedy," said Connie Rodriguez.

Blue ribbons were also tied around trees and poles outside the Davenport Family Funeral home.

"By the time I finished these last few rolls, I will have made a thousand bows that we have just handed out for folks to take away," Regan said. "Honestly, it's the only thing I could think of that I could contribute to this sense of kind of community healing."

Friday the 5-year-old is everybody's child. Hundreds stood in line to mourn and say goodbye to a boy who endured so much cruelty in his short lifetime.

"I want to mourn with the county," said Bill Barry. "It's such a sad thing, I keep thinking of what we could have done."

"I felt at ease knowing he is to rest and that everything is going to be okay for him now," said Taylor Keegan.

AJ's parents Joann Cunningham and Andrew Freund, Sr., are charged with his murder. The reality of the horrific crime really hit home once people stepped inside the funeral home and viewed the small child's casket. Many left the building in tears.

Some of AJ's family is inside the funeral home, but have declined to be identified specifically. AJ's funeral service and burial will be private.

"There is so much support from the community and it really shows people are inherently good despite the tragic circumstances surrounding AJ's death," said Lisa Davenport, owner of Davenport Family Funeral Home.

Friday afternoon, heavy hearts will gather to remember the 5-year-old at a public service in Crystal Lake before he's laid to rest.

"I'm just coming here to pay my respects for my daughter and I," said Lynnette Peterson. We were at his house this week and it just breaks our heart. It totally breaks our heart."
SEE INSIDE: AJ Freund home photos from 2013 show filthy conditions
EMBED More News Videos

SEE INSIDE: Photos show dilapidated and filthy conditions inside the Crystal Lake home in 2013, before and around the birth of AJ Freund.

Meanwhile Friday morning, AJ's father, Andrew Freund Sr., told a McHenry County judge that he was unable to obtain a private attorney, so the 60-year-old was appointed a public defender.

Freund and Joann Cunningham face murder charges in the death of their son after years of troubling history with DCFS.

The ABC7 I-Team obtained, through a Freedom of Information Act request, the missing persons report Andrew Freund, Sr., and Joann Cunningham filed for their son AJ.

They originally reported AJ missing and after a week-long search, detectives said Freund led them to the body and described in disturbing detail what happened the night AJ was killed.

The parents of 5-year-old Crystal Lake boy Andrew "AJ" Freund, whose body was found Wednesday, were charged in his murder.

According to court documents, Freund said AJ was beaten and forced to stay in a cold shower for 20 minutes then he put him in bed, "cold wet and naked."

Police said Freund confessed when confronted with cell phone records and after a week of searching. AJ's body was found in a Woodstock field buried in a shallow grave.