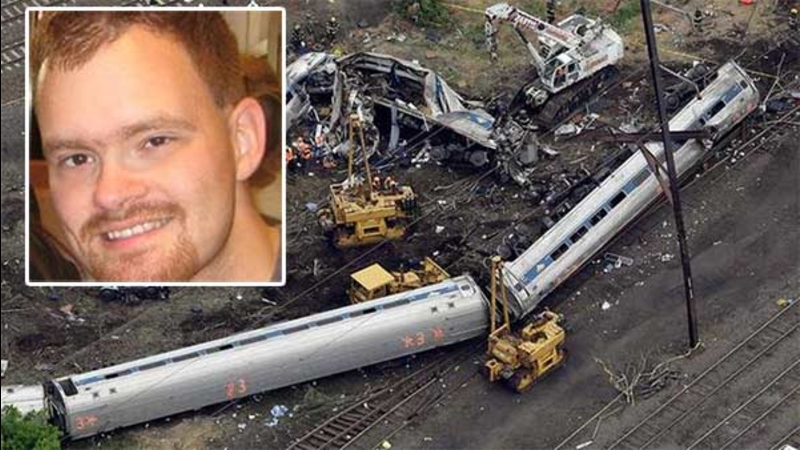 PHILADELPHIA -- The engineer of an Amtrak train that derailed in Philadelphia last year, killing eight people, went "from distraction to disaster" in a matter of seconds because his attention was focused on a commuter train that had been struck by a rock, federal investigators said Tuesday.

Brandon Bostian lost track of where he was and accelerated to a 106 mph as his train approached a sharp curve with a 50 mph speed limit, investigators said at a National Transportation Safety Board hearing convened to pinpoint the cause of the tragedy.

Bostian told investigators after the derailment that he remembered radio traffic from a commuter train operator who said a rock had shattered his windshield.

Investigators said the derailment would not have happened had the stretch of track been equipped with positive train control, which automatically slows a train that's exceeding the speed limit.

If the system had been in place, "we would not be here today," said Ted Turpin, an NTSB investigator.

Video from Chopper 6 shows the aftermath of the crash of Amtrak 188.

The chain of events illustrated the potential for tragedy when people throw rocks at trains - a problem railroads are almost powerless to stop but is so common the industry has a term for it: "getting rocked."

Investigators suggested Tuesday that Bostian was so consumed by radio chatter about the rock-throwing that he didn't realize he was approaching the sharp curve.

Bostian was monitoring radio communications between the Southeastern Pennsylvania Transportation Authority train's engineer and dispatch until about a minute before his Amtrak train reached 106 mph, said Steve Jenner, an NTSB investigator. Bostian's full-throttle acceleration would have made sense for someone who thought he had already passed the curve, Jenner said.

NTSB board member Robert Sumwalt said: "He went, in a matter of seconds, from distraction to disaster."

Bostian didn't attend the hearing. His attorney didn't return an email sent Monday seeking comment. An Amtrak spokesman said the agency will comment after the hearing.

Early in the investigation, the NTSB focused on whether the Amtrak train had been hit with a rock or other projectile minutes before the crash. But investigators confirmed Tuesday that it was not.

Bostian told investigators that he was concerned about the welfare of the commuter train's engineer and "a little bit concerned" for his own safety, but he never indicated in either NTSB interview that his train had been struck, too.

Bostian, regarded by friends for his safety-mindedness and love of railroading, apparently commented in an online forum for train enthusiasts on a range of industry issues, including safety. Some of the posts lamented that railroads hadn't been fast enough to adopt positive train control. The person behind the username signed a few of the posts "Brandon Bostian" or simply "Brandon," though they were never definitively linked to him.

The engineer has been suspended without pay since the crash. A letter from Amtrak in the NTSB files shows he was suspended for speeding.

Amtrak has installed positive train control on all the track it owns on the Northeast Corridor from Boston to Washington. A 56-mile stretch from New Rochelle, New York, to New Haven, Connecticut, is owned by other entities and is planned to have automatic controls installed by a deadline at the end of 2018.

After the derailment, the train's emergency windows dislodged as the train cars slid on their sides, killing four people who were ejected, according to NTSB investigator Dana Sanzo.