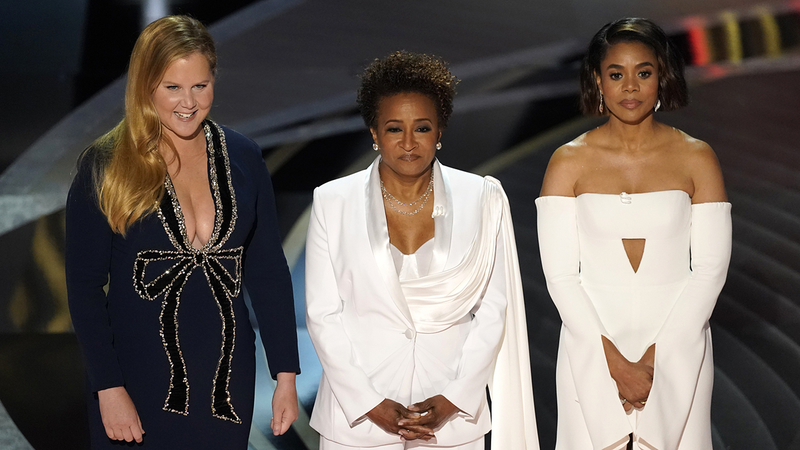 LOS ANGELES -- Comedians Wanda Sykes and Amy Schumer have opened up about the slap heard around the world.

On Ellen DeGeneres' daytime talk show, Sykes, one third of the trio who hosted the Oscars on Sunday, said while she didn't witness Will Smith slapping presenter Chris Rock because she was changing outfits, she did see Smith's profane verbal exchange with Rock and the moments after.

"I just felt so awful for my friend, Chris, and it was sickening," she told DeGeneres, according to a preview clip. "I physically felt ill, and I'm still a little traumatized by it."

Sykes also expressed her frustration with Smith being allowed to stay in the theater and accept his award for best actor.

"For them to let him stay in that room and enjoy the rest of the show and accept his award, I was like, 'How gross is this? This is just the wrong message,'" she said. "You assault somebody, you get escorted out the building and that's it. For them to let him continue, I thought it was gross. Plus, I wanted to be able to run out after he won and say, 'Unfortunately will couldn't be here tonight...'"

Smith has apologized for the incident. Rock has not yet made any public comments but is set to return to the stage tonight in Boston with his stand-up tour.

The Board of Governors for the Academy of Motion Picture Arts and Sciences is expected to hold an emergency meeting Wednesday where it will likely decide on whether to punish Smith.

Sykes says she's upset by the fact that "no one" has apologized to her and fellow hosts Amy Schumer and Regina Hall.

"We worked really hard to put that show together," she said, only for it to be overshadowed.

Sykes shared that she and Rock, however, interacted at an after party and he apologized to her, saying, "It was supposed to be your night," according to Sykes.

Meanwhile, Schumer took to Instagram to share her thoughts, stating she was still feeling "triggered and traumatized."

"I love my friend @chrisrock and believe he handled it like a pro," she wrote. "Stayed up there and gave an Oscar to his friend @questlove and the whole thing was so disturbing."

Rock was presenting the award for best documentary feature when Smith rushed the stage and struck him on the face over a joke Rock made about Smith's wife, actress Jada Pinkett Smith.

"I'm still in shock and stunned and sad. Im proud of myself and my cohosts. But yeah. Waiting for this sickening feeling to go away from what we all witnessed," Schumer wrote in the post, which she also used to plug her Hulu series "Life and Beth," joking "I think we can all agree that the best way to unpack what happened is to stream my series."