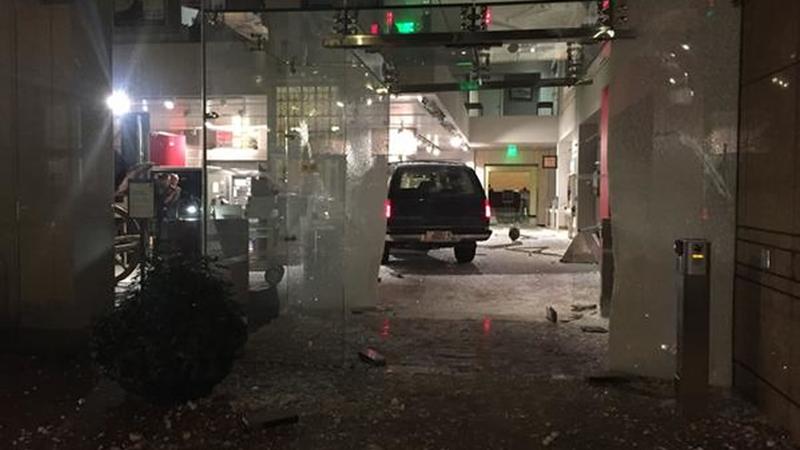 Three suspects involved wore ski masks, hoodies and blue jeans. The three got out, held a security guard at gunpoint and made off with four to 10 ounces gold nuggets from a display case.

The three then escaped in another car, a white Ford Taurus and were last seen heading eastbound across the Bay Bridge.

Three armed men are on the run this am-rammed an SUV into a SF Wells Fargo- grabbed gold nuggets-escaped in a car. pic.twitter.com/AUv7leyQNC

The glass doors to the museum that were broken are estimated to be worth $200,000.

This is the fifth robbery since November in the San Francisco in which thieves have used a car as a battering ram.

Among them, a robbery of a Patagonia store in January, when the crooks backed a U-Haul truck through the store and stole pricey goods. In November, thieves crashed their car into a Chanel boutique and made off with designer handbags. No one has been arrested in those two robberies.

The SUV left behind by three masked men has been pulled from the Wells Fargo lobby in downtown SF #mapit pic.twitter.com/MYgb79porR

One of the first of these 'crash-and-grabs' occurred two years ago at a Tiffany's jewelry store in Walnut Creek.

The thieves may have thought they got gold rush era nuggets may be worth a lot, but they are not.

"These nuggets represented Gold Rush era. Our understanding from Wells Fargo is these aren't the actual ones that were obtained at that time," explained SFPD PIO Grace Gatpandan.

"It wasn't the biggest heist. And no, it wasn't an Ocean's Eleven mastermind heist," said Boris Tavrovsky, with Oxbridge Coins.

But jewelers add that they gold nuggets are rare and could be more expensive.

"Because they're used in jewelry and they are unique, so the value could be three to four times the
Value of gold weight," explained Jay Cresalia with Cresalia Jewelry.

According to the museum's website, the stagecoaches on display in the museum were used by the company in the 1860s, shortly after the company was founded in 1852, as a banking and mail delivery service for merchants and miners who came West during the Gold Rush.

The museum had a collection of gold nuggets from across the West, with some coming from the Calaveras River and the Mariposa River, among other locales.

Towing the SUV out of the lobby proved to be a delicate task. The tow truck operator spent more than an hour trying to move it while people stopped to watch and take pictures.