The 2,500-acre brush fire was burning at 0% containment and moved away from residential areas Friday evening.
KABC
By Marc Cota-Robles and Sid Garcia 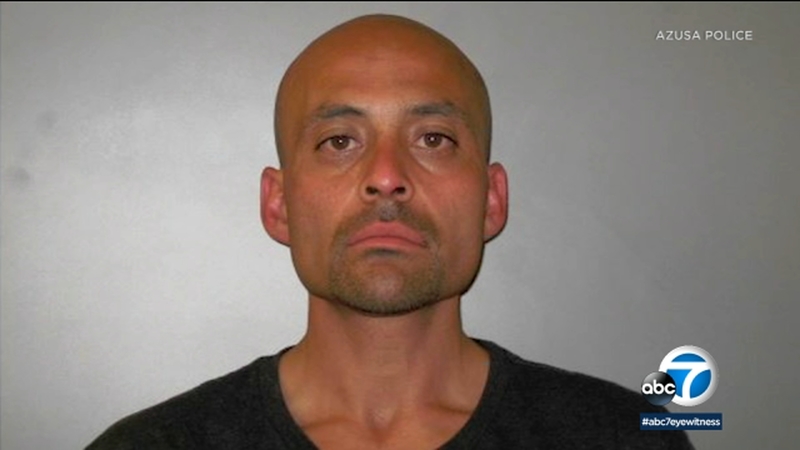 AZUSA, Calif. -- Police identified a suspect in connection with starting the Ranch Fire as residents in Azusa were returning home Friday after evacuation orders were lifted.

On Friday night, Azusa police identified 36-year-old Osmin Palencia as a suspect in connection with starting the Ranch Fire.

Police said Palencia's last-known residence was an encampment in the Azusa Canyon Riverbed near the area where the Ranch Fire started.

Azusa PD said Palencia is believed to be violent and encouraged the public to "use caution" if anyone sees him.

Azusa Police along with @LACoFDPIO Arson Investigators have been conducting a joint investigation of yesterday's #ranchfire.

A suspect has been identified and is being sought for questioning. Please see press release for details.#azusa #CityofAzusa #AzusaPD pic.twitter.com/io2DPi9qMU

The 2,500-acre brush fire was burning at 0% containment and moved away from residential areas Friday evening.

Visibility in the area is from 1/4 to 1/2 mile due to thick smoke, making it difficult for air units to battle flames, with the remaining fire on terrain that is steep and difficult to access, she said.

The Ranch Fire, which began about 1:30 p.m. Thursday near San Gabriel Canyon and Ranch roads, prompted Azusa police to announce the immediate evacuation of the Mountain Cove community.

No injuries or structural damage were immediately reported.

Helicopters and crews on the ground worked to prevent the fire from reaching nearby homes, and shortly before 4:30 p.m., the Los Angeles County Fire Department reported the blaze was growing but "burning away from foothill cities and into the forest.''

The fire spread rapidly in dry conditions, jumping from an initial estimate of 10 acres to at least 3,000 acres by 8 p.m. The acreage was reduced to 2,500 on Friday.

Excessive heat will remain across most of Southern California through the weekend, posing an issue for firefighters battling the raging flames.

While the flames were coming close to several neighborhoods, it appeared the winds were pushing the fire deeper into the Angeles National Forest, moving in a direction away from the homes. Evacuation orders for Mountain Cove residents were lifted at about 11 p.m.

"Emergency vehicles will be on-site for the next 72 hours to monitor the fire," Azusa police tweeted.

State Route 39, also called San Gabriel Canyon Road, was closed in each direction in the area. Northbound lanes were closed at Sierra Madre Avenue and southbound lanes at East Fork Road, according to Caltrans.

Horses evacuated from Mountain Cove were being accepted at Fairplex in Pomona.

Trailers can enter the fairgrounds at Gate 12, located at 2201 White Ave., according to Renee Hernandez, Fairplex's director of communications.

"Owners will need to bring food, water and bedding for horses,'' Hernandez said. "Please be prepared to follow COVID-19 guidelines -- social distancing and masks required. Stables are spaced to assist with social distancing.''

Fairplex has enough stables to board 200 horses, Hernandez said.