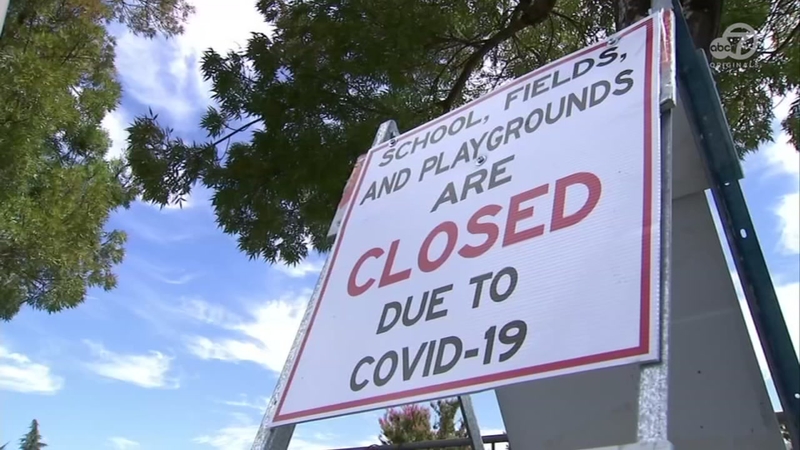 SAN FRANCISCO (KGO) -- Across the Bay Area, kids are soaking up their final days of summer. But with the new school year looming, so are the concerns about going back to school remotely amid the coronavirus pandemic..

BUILDING A BETTER BAY AREA: Back to School

Paul Austin works with underprivileged kids in Marin City, where the median household income is roughly a third of that in all the surrounding areas. For months now, he's seen how the pandemic has put an even greater spotlight on the digital divide -- the disparity between families that have access to technology and wifi and those who don't.

"Internet access is a privilege," Austin said. "Everybody don't have it."

Austin, who works at Bridge the Gap College Prep, said most of the students he mentors have been given chromebooks and hotspots from their schools. But he sees how the digital divide is much more than just getting a device.

"There are kids that don't grow up with a computer at home, so they're not 100% competent at working on a computer with all the functions of a computer," he explained. "And then, they also got to look at, if they do long into it, don't pressure them to make sure that the video is on. They might not feel too comfortable showing what their home may look like."

Silicon Valley investor Jason Calacanis joined ABC7's "Getting Answers" on Wednesday to elaborate on his offer to hire a Bay Area teacher to teach in a learning pod in his backyard.

These concerns only begin to scratch the surface of the challenges school districts across the Bay Area face this fall as they work to make sure no student gets left behind.

In Oakland -- where 70% of the students qualify for free lunches -- the district has raised $12.5 million through the Oakland Undivided initiative. Still, it's no easy feat. The district estimates about half of their students, roughly 25,000 kids, need some sort of connectivity or device.

"Right now, we have computers on order, we have hotspots on order, thousands of each," OUSD spokesperson John Sasaki told ABC7 News. "We're negotiating for broadband. We're doing everything we can to make sure that all of our families that have these needs, that qualify, have what they need."

Even then, there's unforeseen challenges. The 25,000 new laptops are on backorder. Until they arrive, they've supplied most of their students with an interim device. Still, there's a chance some students won't have a device ready when the new school year starts.

We asked California elementary school students to share their thoughts on the upcoming school year. For all of them, it will start with distanced learning -- something that many are not so happy about.

"This is a Herculean task, there's no question about it. But we're in a Herculean world, right?" Sasaki said.

"So, is it going to be the education that they would get if they were in school every day? No, it's not. There's just no way around that," he explained. "But we are doing everything we can to ensure that the education that they get meets the standards that we need to hold for them, and that going forward, once we're out of this, they'll be ready to pick up where they left off."

From San Jose to San Rafael, cities around the Bay Area are working on additional solutions, including setting up public wifi and hotspots.

In Marin City, high school students who have been given devices from their schools say there are still challenges. Stephania Glass -- a rising senior of Tamalpais High who juggles school and full-time job at Target -- said even with those devices she fears the virtual education will be lacking, and she may not be able to get additional help like some of her classmates.

"Our school is a wealthy school and a lot of students are wealthy...all of those kids can afford to get tutors, can afford to do that," Glass said. "And when school stopped, we couldn't really afford to pay $100 an hour to get tutored, you know? And most of our parents don't know what we're learning."

Glass' friend Nancy Hoang chimed in, too. "My parents, they aren't born here, so they don't know half of the stuff that I'm being taught," Hoang said, "So, it's really hard to ask them for help when they don't even know it, you know?"

Throughout the Spring, Paul Austin stepped up and created free, make-shift learning pods that gave his students a safe space to do their work and get support. He hopes in the fall, the school districts step and do the same.

We talked to Bay Area teachers and school officials about virtual learning struggles and what they're doing to make classwork more robust this fall.

"We want the district to take the lead," he said.

It's a solution to the digital divide that isn't actually digital.