Do you talk to fellow BART passengers? These people did and became best friends 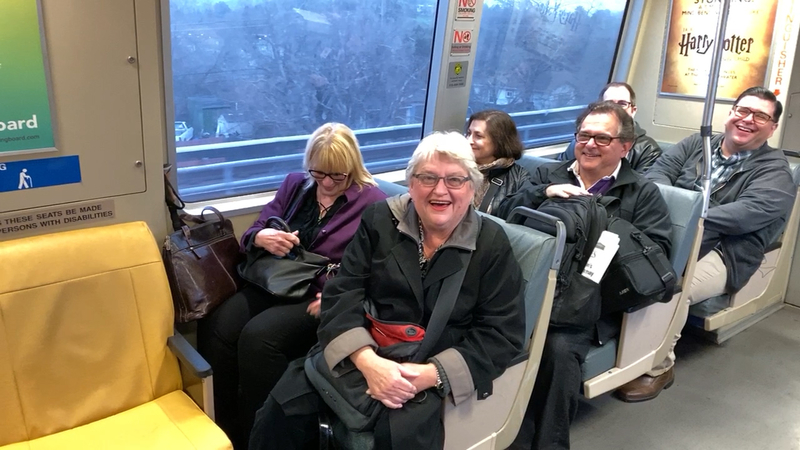 A lasting friendship that began with a BART delay

CONCORD, Calif. (KGO) -- As far as BART stories go, this one is not about broken escalators or dirty trains. But it did start with a complaint about four years ago.

"There was an incident on Bart and we were just sitting on the train here delayed. And we were all getting a bit antsy. And I started talking to Karen and that started it," said BART rider Diane Alyusuf.

Diane and Karen became friends. They started riding together every day from the Concord station. And they chatted the whole way. Other passengers noticed.

"Several months down the road, we were engrossed in a conversation and Karen went past her station in Oakland. And then came in Matt," said Alyusuf.

"I had seen the two of them riding. I got on the same train every single day and I noticed that one of them had missed their stop," said Matt Struck. "I was like, do I say something. Do I not. And I tapped them on the shoulder and I said, 'Hey, I think one of you missed your station.'"

After that, Matt joined in. And the group started to grow.

"Diane would come up and greet people and say, 'Hi, I am Diane.' And we would start chatting. And we just started sitting together more often," said Kate Christensen, who soon joined the group.

After Kate, Carolyn, Russ and Henry followed. They called themselves the Bart Buddies.

"I kept listening to their conversation and we would exchange knowing glances now and then," said Henry Velasco. "I just noticed they were talking about food a lot and movies and that was it for me."

Finding seats together takes some maneuvering. They don't take the first San Francisco-bound train that passes by. They wait for that usually has more empty seats so they can sit nearby, preferably in a quartet, with seats facing each other. Then the conversation begins.

"You can see why people move away from us because we talk a lot and we laugh a lot. And what better way to start the morning than laughing," said Christensen.

"It gives me something to look forward to. I gotta get up because Matt made some cookies. It is really a nice layer of companionship and safety even, that is nice," said Carolyn Hartnell, who walks to her work in Oakland with one of her new friends after getting off BART.

"If you told me friends on Bart, I would say no way. But these are some of the best friends that I have ever had," said Russ Kladko.

That friendship. It started to grow. Soon the group was meeting on weekends for birthdays or going to the movies. They even depend on each other for airport rides. It has become their support network.

"After my knee replacement, Russ came over and sat with me for a while," said Christensen.

"Diane had actually messed up her foot a while back. She was not able to walk to work. I would actually pick her up in the morning and then at night I adjusted my schedule to take her home," said Struck.

RELATED: Got a complaint about BART? The general manager is listening

It's a friend group that didn't start on Facebook. It was started by strangers who saw each other every day and found the strength to say hello.

"If you look around, you don't see anyone looking up at anyone else," said Christensen. "They have their headphones on. They are zeroed in on their phone. They don't look around and actually see who is around them."

"It is definitely nice every morning to exchange conversation and hear about other people's life that aren't other part of your life. Not family. Not coworkers. It takes me out of myself," said Velasco.

Alyusuf knows there are others on BART listening and wanting to join in on the camaraderie. "I've had people tap me on the shoulder as I was exiting Bart and tell me, 'your conversation was great today. I love it."