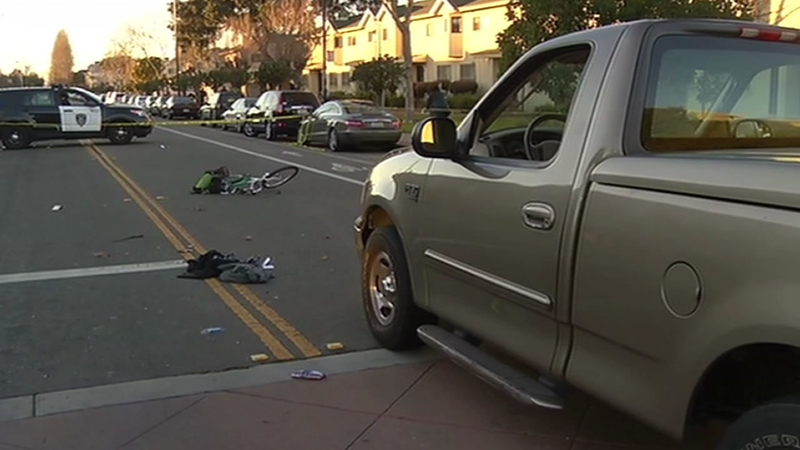 OAKLAND, Calif. (KGO) -- A cyclist was seriously hurt after being hit by a truck on Tuesday morning and was lying unconscious in the street. However, the story gets worse from there.

What 25-year-old Gregory Lowrie needed was help; instead, some witnesses did the unthinkable and robbed him.

The impact knocked the bicyclist some 50 feet from where he collided with a pickup truck. It happened around 11:30 a.m. at the corner of Eighth and Union streets in West Oakland.

"Well we were supposed to meet up. We were going to the food bank after he goes down to the clinic," Margaret Lowrie, the victim's mother, said.

Margaret says her son was riding his bike to the health clinic where he has been undergoing treatment for a serious heart condition. A witness heard the crash and ran outside.

Witness Suga Slim said, "It was horrible and I mean he never moved after that. The man never moved."

But the story gets worse. While the 81-year-old driver of the truck was trying to help Gregory, a group of people went through his truck and stole his wallet.

And while the Gregory was lying on the ground by his bike, badly injured, police say a second group of people came up to him and took his wallet.

"This is a wonderful neighborhood, but there's some lousy people here," Margaret said.

Another witness said, "It's ridiculous. You have a person who's injured. You have a man who hit this individual. He's scared. It's sad. It really is sad."

Gregory's mother says they lost their home in Berkeley two years ago. Margaret said, "You know, when you're down, things just sort of kick you... it seems like. I don't know... It's bad."

The mother and son have been living in an RV not far from accident, while trying to get their lives back together and now this tragedy struck.